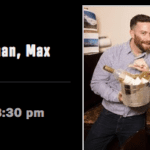 The latest gathering of Jenny Slate, Gabe Liedman, and Max Silvestri, otherwise known as Big Terrific, will be on January 13th, 2017 at Largo at the Coronet Theatre. I

It’s never quite clear when the next Big Terrific is, so you might want to snatch up your tickets now. Get them here.

The love triangle is a tried and true formula within romantic comedies, but making that enticing in 2016 is a bit of a challenge.

Sophie Goodhart’s My Blind Brother has a love triangle between Jenny Slate, Nick Kroll, and a blind Adam Scott that might just be able to pull that off.

Look for My Blind Brother in theaters next month on September 23rd.

Finally, Jenny Slate, Gabe Liedman, and Max Silvestri will convene once again as Big Terrific next month at Largo at the Coronet Theatre.

The rest of our listings for comedy shows/events as well as open mics and maps are embedded at www.thecomedybureau.com

However, for the moment, that’s not the case. That cast has been assembled for the dramedy, Joshy, from Jeff Baena. Middleditch plays a groom-to-be whose wedding gets called off, but has to go through with the bachelor party anyway.

Look for it in theaters starting August 12th, then streaming on Hulu.

Before this week’s season 3 premiere of Drunk History, a teaser of Jenny Slate recounting the story of how evidence for The Big Bang Theory was found by Arno Penzias and Robert Wilson was released.

Here’s the rest of the amazing story, joyfully told by a tipsy Slate, which is how more revelations of the universe should be shared.

We were thinking the guest star cast would be this good.

While that’s all great to hear, we are curious to know if Maria will be playing her mom like she has done now and again.

Your all time favorite inebriated history class is back tonight as Drunk History kicks off its season 3 premiere on Comedy Central at 10:30PM.

Need a little taste of what they got concocted for this season?

Watch Jenny Slate try to talk about Arno Penzias and Robert Wilson trying to uncover mysterious sounds from space while also playing with her dog.

Ari Graynor and Jenny Slate are set to co-star in FX’s newest comedy pilot, co-created by Robespierre and Holm, that follows them on a road trip across the country. If you’ve seen Obvious Child, you know that there’s probably way more bubbling under the surface than just that broad premise and we’re excited to potentially see what that is.

It seems to be the word on the pilot season street is that Jenny Slate will be scaling back her role on FX’s Married for a FX comedy pilot starring her and being written by Gillian Robespierre and Elisabeth Holm. All three last worked together on the indie romantic comedy hit Obvious Child.

As TBS and TruTV have stepped up their game in their recent development slates, respectively, with Samantha Bee’s satirical news show and Those Who Can’t, we certainly hope that this pilot becomes official soon.

“Birdman” and “Grand Budapest Hotel” Win, But So Does “The Lego Movie” and Jenny Slate at Critics’ Choice Movie Award

While some are still focusing extensively on the movies that got snubbed at The Oscars, The Critics’ Choice Awards definitely gave honors to some of those in that are making that snubbed list.

However, Jenny Slate took home the trophy for Best Actress for her performance in Obvious Child.

The Guardians of the Galaxy and The LEGO Movie also got the awards for Best Action Movie and Best Animated Movie respectively.

So, we’re glad that The Critics’ Choice Movie Awards gave some distinction to folks that otherwise would be ignored by a certain Academy.

During her interview on Conan last night, Jenny Slate admitted that only recently has she watched one of the cornerstones of American cinema during the holidays, “It’s A Wonderful Life”.

While the movie is a classic, Jenny also revealed that she loved it in a way that most people probably have gotten to quite yet.

Side note: more movie reviews should be more like this.

The awards season for movies are coming closer with plenty of speculation as to who the front runners are. Well, some suspicions and pull quotes have been confirmed with Film Independent’s Spirit Awards announced the nominees for 2015.

The wonderful Jenny Slate also got a Best Actress nomination for her great performance in Obvious Child.

Everything else nominated was dramatic, gritty, heart wrenching, etc.

The release of the latest Marcel The Shell book from Jenny Slate and Dean Fleischer-Camp, The Most Surprised I’ve Ever Been, is tomorrow Oct. 21st.

To get you even more into how delightful Marcel the Shell is, the latest video with Marcel is now up and shows him literally be under the weather, both ways.

Watch it here and just try to not find it endearing (it’s impossible).

Jenny Slate Sings a Song as Marcel The Shell

One can easily be lulled into the magical illusion of Marcel the Shell with Shoes actually having that fragile voice that he has, but you should know it’s actually the voice of Jenny Slate.

If you’re looking for proof, then look no further then Jenny’s appearance on The Late Show with David Letterman last night where she sang as Marcel.

Then, once you’re overtaken with how adorable this is, you’ll want to pick up the new book due out next week, Marcel The Shell, The Most Surprised I’ve Ever Been.