Kicking off the year with carefully crafted, vicious sh*t talking seems to be somehow appropriate for 2017.

In that spirit, Roast Battle II headed to NYC for its first set of regional rounds and you can see what went down tonight at Comedy Central at 11PM.

Get a taste of it with this clip of Yamaneika Saunders vs. J.P. McDade.

Each had six seasons of Saturday Night Live under their belt and are now free to explore other projects like Killam was already doing with a movie he was directing.

We’re guessing that Taran Killam and Jay Pharoah might take a slightly different route post-SNL given their specific comedic skill sets as compared to recent SNL alums like Kristen Wii and, Fred Armisen. That being said, we can see Killam follow the model of Jason Sudeikis’ very successful film and TV career that now spans comedy and drama given that filled a very similar role on Saturday Night Live. 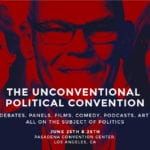 To be featured at Politicon this weekend:

-Pres. Vicente Fox in conversation with Al Madrigal and Alejandra Campoverdi
-Larry Wilmore from The Nightly Show interviewed by James Carville
-Darrell Hammond and Jay Pharoah from Saturday Night Live
-Greg Proops from “Whose Line Is It Anyway?”
-Al Madrigal from The Daily Show
-Comedians Grace Parra, Robin Thede, and Jordan Carlos from The Nightly Show
-Lizz Winstead, creator of the Daily Show and founder of Lady Parts Justice
-Upright Citizens Brigade
-The BIG Debate with “Trump vs Bernie” with Anthony Atamanuik and James Adomian

Help Make Sure “The Adventures of Drunky” Gets Finished on Indiegogo

Earlier this year, we reported on an enticing R-rated animated feature in the works called The Adventures of Drunky that follows a bet for the fate of the planet between God and The Devil and a drunk.

Well, Augenblick Studios has the script done and the dialogue recorded, but need funds to finish animating the whole thing. Thus, an Indiegogo campaign was born.

So far, they’ve raised $27,331 at the time of this post out of their minimum $100K goal. That will get them through the next step of production, but they’re looking to raise $2 million to finish the entire movie. They have just over three weeks to reach their goal and have fabulous rewards at various donations levels including lunch with Jeffrey Tambor, a personal insult voicemail from Dave Attell, digital copy of the movie and more.

Here’s God, as voiced by Jeffrey Tambor, and director Aaron Augenblick filling you in on all the details.

You can (and should) donate here.

While Eddie Murphy has already received his actual Mark Twain Prize for Humor at the ceremony, the rest of us only know that he ribbed Bill Cosby during his acceptance speech.

We don’t know what Kevin Nealon Jay Pharoah, and more were up to during the ceremony, but it seems like they were there honoring Eddie in their own particular way.

We’ll definitely be curious to see if Eddie’s acceptance speech goes a little more into some bits/material/etc.

If they can make a gritty Snow White remake, why not a gritty update for Bambi?

That’s what SNL was thinking lat night when they made a trailer for something that’s a Fast and Furious 7 meets a live action Bambi with The Rock wearing deer ears and a fur vest and Taran Killam in a muscle suit and bunny ears.

Yes, they have plenty of pun “kill lines” too.