“Please Understand Me” Is The Next Thing You Should Be Watching

The idea of showing comedians in therapy gets taken to the next level with Please Understand Me from the brilliant duo of Ahamed Weinberg and Steven Feinartz.

In this web series, fictional stories are made up for pairs of comedians who sit down with actual therapists, accented with colorful interstitial flashbacks. Of course, the stories themselves are perfectly ridiculous and played to perfection by a great cast, which includes many of our favorite comedy folks such as Rory Scovel, Natalie Palamides, Mo Collins, Fred Melamed, Steph Tolev, Ismael Loutfi, Ahamed, Juzo Yoshida, Chad Damiani, Phil Burgers, and Punkie Johnson.

We Could Watch Hours of Camping With Todd Glass, Eddie Pepitone, Jon Dore, and Zach Galifianakis

This “slice of life” comedic mini-doc is from a few weeks ago. However, it’s so damn delightful in a dreamy way that we couldn’t dare think of not posting it.

Please enjoy it and take cues for how to make camping actually fun here.

You knew that Norm Macdonald had his own show where he does whatever strikes his fancy, right?

Well, his eponymous show returns for its 4th season on Tuesday, July 25th via JASH with none other than comedy/showbiz/late night legend David Letterman as one of the guests.

See for yourself in this preview clip here.

Also, you can catch up the previous three seasons of Norm Macdonald Live here. 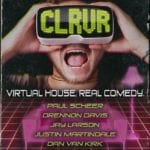 One of LA’s long running comedy house shows, Comedy Living Room, is now being done in VR coming up this week through JASH and AltspaceVR.

The line-up is pretty fantastic and with someone like Paul Scheer on the show, you’ve got to wonder what shenanigans he’ll try to pull with it being a VR comedy house show.

Also, to all of those without a VR headset, you can enjoy the show on your desktop or laptop computer.

It shines a light on one of Tinseltown’s unsung heroes, the sound mixer, and then shows how weird one of those guys can be all in gorgeous black and white.

Jamie Loftus and JASH Will Be Livestreaming a Choose-Your-Own-Adventure-1980s-Political Thriller/Ballet Performance “Swan Lake Live!” From a Locked Basement

If you love absurdist, experimental comedy, please commit the name Jamie Loftus to memory (we’ve suggested doing this on a number of occasions as we find Jamie to be hysterical).

You can see why we love Jamie with her latest endeavor that mixes ballet, conspiracy theory, President Ronald Reagan, and choose your own adventure all into one event that will be livestreamed.

The premise of the show goes: it is March 30, 1981, the day of Reagan’s assassination attempt, and I play a ballerina/government spy named um Jamie Loftus which is my name and my associate Gary and I come to in a locked basement that is slowly filling with gas from a stove full of ham upstairs. Suspecting that our employer, the president, may be in danger, we are tasked with escaping the basement and saving Ronald Reagan (who is a shitty president but we don’t know that yet it’s only 1981 keep up) while still performing Swan Lake in its entirety.

WHY WE NEED YOU: Because this is a livestream, I’m introducing several choose-your-own-adventure style choices in the show, including whether I should do a complicated ballet dance in a Ronald Reagan mask or whether I should buttchug a bottle of milk after punching through a pinata I made of Jodie Foster’s head.

THERE WILL BE: five dances to Swan Lake, five choices for the audience, three original cartoons from me Jamie, two miserable ballerina ingenues trapped in a basement that is slowly filling with gas, two costume changes I have to do live on camera and only one chance to see it live.

Also, my boyfriend is a young man named John Hinckley Junior, a man who you may not have heard of as of March 30, 1981 but who I think has the potential to really make something of himself.

You can get more details about Swan Lake Live! (From a Locked Basement) here and livestream it on JASH tomorrow at 12PM PST-3PMPST.

Sarah Silverman Will Now Be Doing a Netflix Comedy Special

Sarah Silverman Will Now Be Doing a Netflix Comedy Special

Well, Netflix now has quite the stacked deck for 2017. Following from Chris Rock, Dave Chappelle, and Amy Schumer,

Sarah Silverman is the latest big name comedian to have done their last comedy special at HBO and is set to do their newest special at Netflix. Silverman will shoot her special soon and Liam Lynch will be directing along with JASH, which she co-founded, producing.

We’re are thoroughly intrigued, given how outspoken Sarah has been in the political spectrum and the times that we’re living in now, what exactly she will do with this new special.

The Cooties and Reggie Watts Make “Trumpy Trump”, the Only Actually OK Trump Supporter Song (Because It’s Still Against Trump)

So, as a group of greats, they made a perfect, satirical Trump supporter song and accompanying music video, Trumpy Trump, that shows why one Donald Trump isn’t actually fit to make anything great at any time.

The rumors are true. There is stuff that you should watch on go90.

The Cooties are definitely one of favorite things that we found out about in 2016. Their absurdist songs strike a great balance of being solid pop music while being almost completely out-of-left-field with their lyrics.

Recently, they got a chance to make a TV pilot with JASH through Verizon’s go90 and got the free reign to really go to the nth degree with pure, uncut, silly brand of comedy.

The result is Dad Friends and you should watch it as soon as you can.

The name Tond should clue you in the wry, existential humor that flows through every frame of this short film.

Kelly Hudson wrote, starred in, and edited it and plays a lonesome old man named Tond looking for someone, anyone to connect with. The result is pretty wonderful and, we’re betting, will make you feel less alone in the universe. Josh Ruben and Vincent Peone direct and it’s another great offering from JASH via go90. Get more details and RSVP for free here.

Chris Charpentier Has One of The Weirdest “Best Days Ever”

You’re just going to have to watch the whole thing to really grasp it.

Really, you need to watch the whole thing and appreciate the clever talents of The Nix Brothers.

From the minds of Adam Brodie, Dave Derewlany, and Jon Dore comes this great, dark sketch at JASH that explores the worst possible backstory that one could get in trying to escape from hostile territory. Maria Bamford and Katie Crown, who are also featured, really drive the point home.

A couple of months ago, Reggie Watts and JASH teamed up to do a VR event where Reggie would perform in a virtual reality space for as many people as possible.

If you’re wondering how they pulled it off, here’s a look behind the VR headset.