Later This Year, There Apparently Will Be a Doc About Rory Scovel Doing an Entirely Improvised Performance

There are few details as we only heard this mentioned briefly in passing on the latest episode of the delightful podcast Pen Pals with Daniel and Rory (#GrowTheShow), but, apparently, there is a documentary in the works following the one and only Rory Scovel doing an entire performance (we’re assuming an hour) of stand-up entirely made up on the spot.

It was shot in Atlanta and Scovel called it a doc rather than a traditional comedy special, which leaves a lot to the imagination. Fortunately, when it comes to imagining what Rory does untethered to material, the possibilities are endless (and usually one of the funniest things you’ve ever seen like the time we saw him riff on concrete for 10 minutes).

The picture above is not from the doc, but just something we snapped recently because Rory came out on stage with a Bible he found backstage and was threatening to make the comedy show a Bible study of sorts. It’s the sort of magic that Rory is just great at creating.

We’ll keep you in the loop as more details emerge. 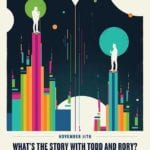 Todd Glass and Rory Scovel will be up to their completely unplanned, guided-by-their-whims-moment-to-moment hijinks yet again this weekend with another edition of What’s The Story with Todd and Rory? at the Lyric Hyperion in Silverlake.

If you need some pure, unfiltered silliness right now, this is the ticket to get.

Tickets are still available for $7 (and $10 cash at the door). Go get them right now right here. 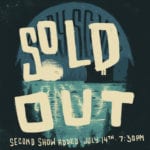 Very quickly, the two shows at The Lyric Hyperion where the one and only Rory Scovel will be riffing his whole set sold out of advance tickets (7/14 will have a limited number of tickets available at door).

Lucky for you, we got a pair of tickets for someone with a bit of luck on their side!

Enter here for you chance to see what ought to be a night you’ll never forget with Rory on 7/14: http://thecomedybureau.dola.com/giveaways

One of the few comedians who can enact an Inception-like number of layers within his bits, Todd Glass goes on Set List and does what you’d expect with riffing on the idea of doing material on the topic instead of doing the topic and making it still funny.

There is a select group of comedians that riff so wonderfully that doing improvised stand up at Set List for them is almost second nature.

The amazing Eddie Pepitone is one such individual and you should watch his “set list” now.

#brainboxupdate: Set List – the great stand up show idea by Troy Conrad. I did the show…

#brainboxupdate: Set List – the great stand up show idea by Troy Conrad. I did the show…

Set List – the great stand up show idea by Troy Conrad. I did the show tonight with a bunch of great comics. The premise is: a comic is given a “set list” that you’ve never seen before and you perform it like it’s been in your act forever. It’s a fantastic idea for a show and a heck of an…

Great recap from a great comic of a great show.  Trust me, I was there and it was…. GREAT!!! (think Tony the Tiger)