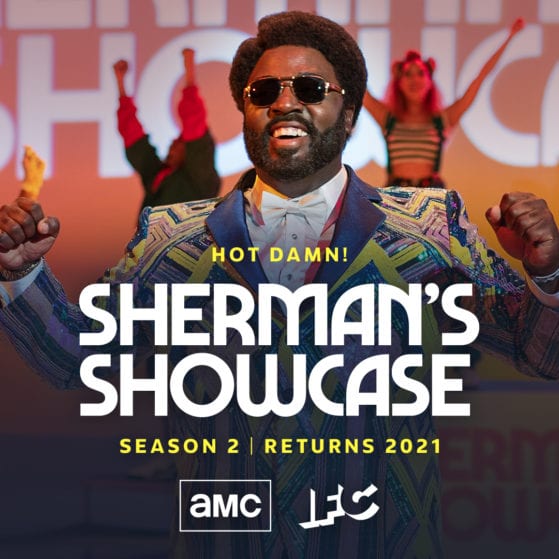 For All of April, IFC Will Be Streaming MST3K, Baroness Von Sketch Show, Birthday Boys, and More for Free

More networks are being a little more gracious with their content in this time of need, especially to those that do not have a subscription in order to watch exclusive shows. IFC, along with AMC, BBC America, and SundanceTV, are the latest networks to offer many hours of their original programming in front of a pay wall for everyone to stream and enjoy.

Specifically, IFC will be giving us all access to “…Baroness von Sketch Show, Birthday Boys, Spoils of Babylon, Spoils Before Dying, Bunk, Food Party, as well as select episodes from Comedy Bang Bang and Mystery Science Theatre 3000,” throughout all of April. There certainly is high brow silliness to revel in with this offering including old episodes of MST3K, but, for those who missed out, please go and enjoy Kurt Braunohler’s wild, completely faux game show, Bunk, that managed to work in Braunohler’s absurdist sensibilities to every inch of a game show format.

Get into all of these free IFC treats for this month right now over at IFC.com.

Greener Grass, the debut feature film of comedy duo Jocelyn DeBoer and Dawn Luebbe is a very, very, very refreshing break from almost every norm imaginable. Arguably, amidst a never-ending conveyor belt of film adaptations and sequels, this hysterical, pastel-saturated fever dream is the film, we feel, that we need right now.

Every inch and every second of Greener Grass, from the color palate, to the shot selection, the pacing, rhythm, perfect crack-in-the-veer performances from the entire cast, and the plethora of golf carts seems so carefully orchestrated, yet done with a rebellious abandon that we happen to really dig.

We could go on and on with the echoes of David Lynch, Todd Solondz, and so many more influences, but Greener Grass achieves it own offbeat identity that is so charmingly weird, even in its most absurd and tragic moments.

So, go see Greener Grass wherever you can (and push for it to play in wider release if you can).

Please Enjoy the Beautiful Weirdness in the “Greener Grass” Trailer

The equations in which you could try to make a comparison for Greener Grass are endless thanks to it bright and joyful color palate, unflinchingly bizarre world, and the characters that take said bizarre world as is. It’s so wild and out there that you’re trying to make any sense of what demented wonder lies in store when Greener Grass hits theaters (that’ll be on Oct. 18th FYI).

For us, it’s somewhere between a John Waters movie and an episode of Arrested Development, done up in the world of At Home with Amy Sedaris (with healthy sprinkling of magical realism thrown in).

This feature debut from Dawn Luebbe and Jocelyn DeBoer really does like a doozy and we can’t wait to visit their world of Greener Grass.

See for yourself in the trailer here, then look for Greener Grass in theater on Oct. 18th.

When it comes to hyper specific angles in sketch comedy, IFC really wants to dominate that segment of comedy. Portlandia and Documentary Now! already did a comedic interpretation of Portland and famous documentary films respectively.

Now, IFC has their latest offering along these lines with Sherman’s Showcase from Diallo Riddle and Bashir Salahuddin, a satirical take on a fictional music variety show that bares a striking resemblance to legendary music-dance show, Soul Train. It’s being billed as a sketch comedy, which leads us to believe they’ll step outside of being solely a Soul Train parody.

In a weird way, this seems almost seems akin to all those Charlie Murphy stories on Chappelle’s Show and, as a matter of fact, there is someone playing Prince or a Prince-like character here. We’ll have to wait until Jul. 31st to see how that all plays out.

For now, just enjoy all of this in the Sherman’s Showcase trailer.

Respectively, IFC’s new additions to their development slate include a semi-autobiographical series about being a mixed race asian millennial from Katie Malia and Margaret Cho, a priest writing erotica under a pen name from FoD, an art heist comedy, an comedy about agoraphobia from Timm Sharp and Jonathan Ames, and a socio-political long form sketch comedy show focusing on the racial divide in the United States.

This all sounds very, very intriguing, especially as IFC is figuring out what to do with the face of their comedy brand once Portlandia ends. So, we hope we’ll get to see how any of this will look, sound, or feel in the not so distant future and get an idea of what IFC’s comedy will be like going onwards into the next decade.

“The new york times art section is telling you to watch #AnEmmyForMegan on ifc tonight because it’s art https://t.co/ivX1d0CAeM” -@meganamram

Since An Emmy for Megan was unfortunately snubbed for an Emmy, tune into IFC at 11PM to be on the right side of history.

Years from now, history might just look back and never find anyone that will have trolled the Academy of Television Arts & Sciences and the Emmys quite like Megan Amram did in 2018.

We wouldn’t be surprised at all if Amram pulls off an EGOT employing similar tactics for the Oscars, Tonys, and Grammys.

As a comedy horror series, Stan Against Evil is already at certain level of funhouse chaos, especially having had two seasons under its belt.

From the looks of this season 3 teaser unveiled at Comic-Con, they’re raising their own bar on how bonkers they want to get including sentient puppets and their own version of Mulder and Scully. We’re on board for all of that and more.

See for yourself here, then look for the season premiere on Halloween on IFC.

While Get Out took top honors of Best Feature and Best Director at this year’s Spirit Awards, seemingly every other award went towards comedy as you can see below:

Also, John Mulaney and Nick Kroll served up another sharp awards show monologue that was fun and loose, but also game to go a little dark or blue. Watch it here.

One last thing to notice: We’re pretty sure Timothy Chalemet had Armie Hammer who was on a beard shirtless on Facetime (as Hammer was not present at the ceremony). It definitely sweetened the Call Me By Your Name chunk of the monologue.

While so much talk in the entertainment biz is about The Oscars this weekend, please do not forget that you can basically watch another TV special with Nick Kroll and John Mulaney as they are again the hosts of this year’s Film Independent Spirit Awards.

The awards telecast will be broadcast live on IFC at 2PM PST this Saturday. Here are two promos that will key you in on to how much fun this will be.

When 2020 (hopefully) rolls around, we’ll have a non-psycho President elected and Kroll and Mulaney will be seen as one of the best comedy duos of the last decade.

We’ll be excited to see what they have up their sleeve. The 2018 Spirit Awards are set to air on Saturday, Mar. 3rd at 5PM PST on IFC.