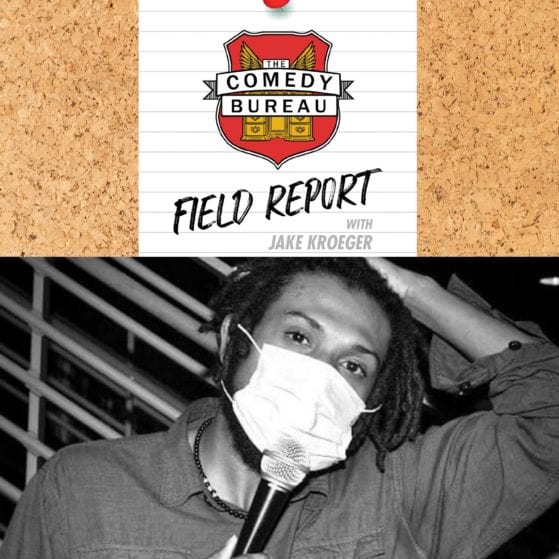 Performing stand-up comedy on a street corner, unannounced in Riverside might be quite the risky, lonely proposition. However, given the times of COVID-19 that we’re still very much in, we’re not afforded much else in live comedy.

Thusly, Aaron Chase, currently based in Riverside, has tried to busk on the corner, unannounced, with his stand-up that he feels he still is very much honing, to empty, socially distant chairs (though, sometimes, he gets a small distanced crowd of passersby). The image of it almost looks fresh out of a René Magritte painting, but Chase carries on, sharpening his comedy on his terms as safely as he can by doing it completely alone. Aaron goes over the journey to and through performing stand-up on the street alone and what he wants to do going forward/when the pandemic ends with TCB’s Jake Kroeger.

You can follow Aaron @aaronchase91 on TikTok and on IG. Aaron’s One Man Show (and comedy) is streaming for FREE at your conveniece on YouTube here.

If you were looking for another reason to love the fantastic Rick & Morty on Adult Swim, we’ve got one. The animators behind Rick & Morty just recently unionized on their own through the Animation Guild. This is important considering many of Adult Swim’s cartoons surprisingly aren’t unionized.

The crew will now get a standard hourly wage, health coverage, pensions, etc. This undoubtedly will lead to a more productive team at Rick & Morty and one hell of a second season.

The editors of Last Comic Standing at NBC got to unionize under IATSE and the show will move forward, as far as we can tell, and still premiere on May 22nd.

WIth this deal, the strike only lasted two days, which will hopefully become more the case in future entertainment strikes.