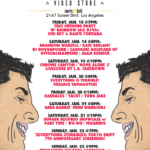 The Jerry Maguire Video Store, the video store art installation put together by Everything Is Terrible that will be stocked with only VHS copies of Jerry Maguire, officially opens this Friday, January 13th in Echo Park’s iam8bit.

The opening is free to attend, but there are plenty of great events lined-up throughout the rest of the month. You can tickets to all of that here.

A Video Store Comprised of Over 14,000 Jerry Maguire VHS Tapes Exclusively to Open in Echo Park

For several years, the satirical video art collective known as Everything Is Terrible has collected every single copy of Jerry Maguire on video cassette tape that they could get their hands on.

Their efforts have led them to collecting over 14,000 copies of the film Jerry Maguire which will now be used to create a pop-up “video store” exhibit at iam8bit in Echo Park. It’ll be like the Blockbuster brick-and-mortar stores of yore, but with only Jerry Maguire lining every shelf. The mere idea of this is ridiculously absurd and fun while also offering much more to dissect than other large scale art projects in LA like that giant rock outside of LACMA.

This is only the start as a permanent #JerryPyramid in the desert being built is a goal that this exhibit is ultimately shooting for.

Through the two week run, there will be live events including comedy from Kate Berlant, DJ Douggpound, Greg Barris, and, of course, some video mischief from Everything Is Terrible.

Start looking for The Jerry Maguire Store on January 13th.