The award winning Master of None and Jill Soloway return to their respective streaming services, Netflix and Amazon Prime, to debut a second season and a new series, I Love Dick.

With that said, what a great time it is for “peak TV” and we hope that you’ve got a lot of free time this weekend. 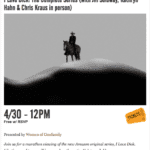 Jill Soloway’s new Amazon series I Love Dick will be screening in its entirety at Cinefamily this Sunday. Also, Jill, star Kathryn Hahn, and novelist Chris Kraus will be on hand at the event.

If you don’t have Amazon Prime, this would be a pretty great opportunity to not even use any sort of free trial of Amazon Prime and watch the show. Get more details here.

Jill Soloway has already sealed her throne at Amazon with Transparent and now her next series, I Love Dick, is about to premiere next month.

This new show follows the new found obsession of a married woman played by Kathryn Hahn of Kevin Bacon who plays an alluring, but mysterious professor that her and her husband, played by Griffin Dunne, come to study with.

From this trailer, you can see that Soloway has honed a signature style of cinematic dramedy.

Look for I Love Dick to start streaming on Amazon Prime on Friday, May 12th.

Looks like Amazon might be getting the hang of this streaming service thing or, at the very least, have a better grasp of what they want their programming to be.

Just a few weeks ago, Amazon streamed all their comedy pilots, the aforementioned The Tick, I Love Dick, and Jean-Claude Van Johnson, per their original programming development model that supposedly works in audience votes into the greenlighting decision process.

We’re not sure exactly what made Amazon brass greenlight all three series which cover a wide range of types of comedy (a live action version of The Tick and a new, sexuality subverting series from Jill Soloway almost seem on the opposite ends of the comedy spectrum), but they have indeed ordered full seasons of all three series.

Just hope it won’t be too long before we can start see the rollout of each of these series.

Amazon Pilots for Jean Claude Van Johnson, I Love Dick, and The Tick Are Now Streaming

The latest round of Amazon’s comedy pilots up for voting are here.

You can watch Jean-Claude Van Damme go undercover as field agent version of himself, Peter Serafinowicz as a live action version of The Tick, and Kathryn Hahn starring in another Jill Soloway directed dramedy and vote on which should go to series.

This is a good, common sense move by Amazon Studios.

Jill Soloway is responsible for a good percentage of Amazon’s critical acclaim from her series Transparent. So, it only stands to reason that the online giant would get her working on another project.

This time around, Soloway is adapting a 90s novel called I Love Dick by Chris Kraus, which follows a marriage unraveling, the birth of an artist, and an intriguing professor with the name Dick in the backdrop of Marfa, Texas.

It would seem that TV now has legitimate auteurs and they have more freedom than ever to do what they want because of a certain track record.