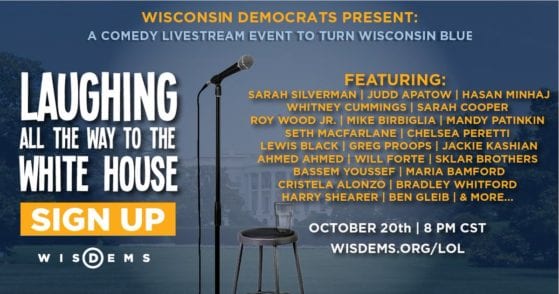 Pick of the Day: Laughing All the Way to The White House 10/20

As you may well know, Wisconsin is a major swing state. As such, there are plenty of big fundraisers that are going towards making sure it swings left.

That’s a line-up worth catching in support of almost any cause. Taking Wisconsin back for the left just happens to be a really great cause to boot.

Access to the live-stream is available via donation. Do so here.

Harry Shearer Will Now Be Returning to “The Simpsons”

So, you can stop you’re speculating who does the best Mr. Burns and Ned Flanders voices.

So, potentially, The Simpsons could stay in tact as is for 30 seasons.

Now, we’ll be curious to see if this makes it into the show through some clever, self-referential joke with one of the many characters that Shearer voices.

Harry Shearer Is Leaving “The Simpsons”

Shearer turned down the offer that was made for the rest of the cast as he wanted to pursue other projects.

from James L.  Brooks’ lawyer: “show will go on,  Harry will not be part of it, wish him the best." This because I wanted what we’ve always had: the freedom to do other work.

This, as you can imagine, leaves a big hole in The Simpsons cast as they go into their next two seasons that were just ordered by Fox.

However, the show plans on finding new talent to step in for the bunches of iconic characters done by Shearer.

We’ll be curious to see if this is addressed at all in any episodes of The Simpsons.

Stand Up from the Couch (Live-stream)