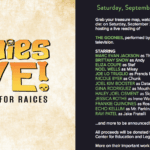 A live reading of the film classic Goonies with that very, very stacked cast and it all being done as a benefit for RAICES? Get. outta. town.

Well, actually, stay in town and go get tickets that are going from $35-$75 here. The Montalban is a pretty sizable venue, but you might want to get in on this before it sells out.

Those are the comedy folks that are listed next to Pope Francis, Stephen Curry, Lin-Manuel Miranda, and Hillary Clinton.

Time Magazine just released its annual big-to-do list of the 100 Most Influential People this year and the likes of Jane The Virgin’s Gina Rodriguez, comedy multi-hyphenate Aziz Ansari, enduring comedy star of Julia Louis-Dreyfus, and bonafide, self-made comedy force Melissa McCarthy all made the list.

John Oliver (”the John Oliver effect” is a real thing) and Samantha Bee (Full Frontal, like Last Week Tonight, picked up right where Jon Stewart left off and added more bite over bark) seem to be absent from the list, but don’t let that take away from how great Master of None, Spy, Veep, and Jane The Virgin are.

More and more barriers are getting broken down with every new comedy that steps up to the plate of television. Jane The Virgin, which got plenty of critical acclaim in its first season and the full-on musical, and edgy romantic comedy Crazy Ex-Girlfriend represent The CW’s new intriguing block of this sort of comedy on Monday nights.

Also, they’re running an hour long each tonight just in case you were worried you weren’t going to get enough.

Women in comedy are definitely having a moment right now unlike they’ve had in decades past.

Not only are Tina Fey and Amy Poehler comedy power brokers, but there are more female producers, writers, and directors making female led comedy series and movies.

That being said, there is still a lot of stereotypes and prejudice that needs to be fought against. So, The Hollywood Reporter had a frank roundtable discussion with Amy Schumer, Ellie Kemper, Tracee Ellis Ross, Gina Rodriguez, Lena Dunham, and Kate McKinnon about carving out their niche in comedy.

The comedy winners of this year’s Golden Globes are: