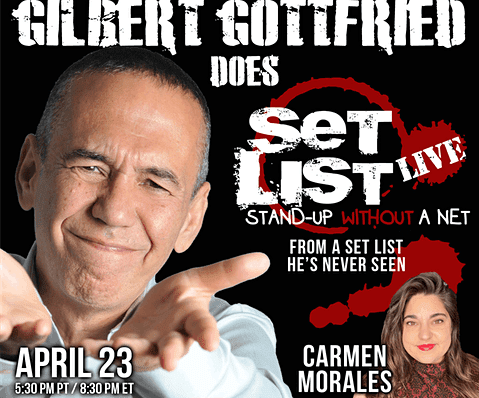 Pick of the Day: Gilbert Gottfried Does Set List Live! 4/23

Before lockdown, when international comedy was able to be done in person, there was a phenomenon known as Set List that challenged comedians ’round the world to improvise stand-up based off of absurd, never-before-seen topics as if it was a part of their long-standing, best-selling act. It had played almost every single comedy festival in existence and had been a TV show in both the UK and Australia.

Of course, in person comedy has taken a “sabbatical” due to the pandemic, but the virtual space has provided for plenty of new avenues and innovation and transition in comedy. Set List, given it’s reach and the fact that both comedians and audience discover a never-before-seen topic together makes it kind of a dream for virtual comedy, which is why we’re thankful to see the iconic Gilbert Gottfried do a whole Set List show (with Carmen Morales opening) this Friday at 5:30PM PT/8:30PM ET via Nowhere Comedy Club.

Gottfried speaking on completely random topics, after all of what the world has been through, really ought to be one of the more thrilling comedy experiences throughout the entirety of this virtual era of live comedy.

Tickets start at $10 and you can (and very much should) get them here.

It really takes a special kind of comedian to be worthy of a documentary that puts their life, both on and off stage, under the microscope.

Gilbert Gottfried is definitely one of those comedians.

The upcoming documentary Gilbert from Neil Berkeley will not only looks into the long, winding, storied career of Gottfried, but show what he’s like in between being the unmistakable voice on stage and screen. In fact, you get to hear what his real voice sounds like.

So, he’s just going to be a little less crazy than De Niro’s Rupert Pupkin from The King of Comedy.

Not only is there a lot of buzz on the order of award nominations around this latest De Niro vehicle, The Comedian, but he’ll play an insult comic that has to face his own demons and grow, which definitely has our interest peaked. Hannibal Buress, Gilbert Gottfried and Jim Norton will be featured as fellow stand-ups in the movie and the insults were written by none other than the Roastmaster General himself, Jeff Ross. We haven’t seen a trailer or a TV spot, but it’s kind of hard to not have a bit of a good feeling about The Comedian.

Look for limited release from Sony Pictures Classics at the end of this year/beginning of next year.

That’s all of what’s in Debate Wars that’s coming soon to Seeso. See for yourself in the trailer.

No material and all crowd work was the order for the evenings of Big Jay Oakerson’s new Seeso series What’s Your F@%king Deal?

Given who they got for the show, it seems like a real good time. Also, note that you don’t have to worry about being talked to as this has already been recorded.

Then, get a taste of it in this trailer.

After all of that, you can go get Seeso, if you don’t already have it, and start streaming it.

This year’s NYC Podfest shows that the festival is only getting bigger and better.

If the LA Podcast Festival is any indicator on how fun going to a festival of live podcast tapings can be, then make sure you catch this in NYC next year.

Get your tickets for the NYC Podfest here.

Scott Rogowsky Uses His Own Talk Show To Interview Roommates

Scott Rogowsky has been hosting his own live late night talk show Running Late for years, but made history recently by using said talk show to find a roommate.

He made a listing for an open house, then notified people that there would be cameras documenting them for a “project on NYC housing”. He didn’t explain any further and had potential roommates walk into a talk show set in a living room complete with guests Gilbert Gottfried, Andrew WK, and music band leader The Gregory Bros.

He made a whole web series as a result of this experiment that you can watch right here.

Adult Swim gives us a first glimpse into an intimate dinner conversation hosted by Brett Gelman attended by Alison Pill, Gilbert Gottfried, Fred Melamed, Lance Reddick, and more. It will be Dinner with Friends with Brett Gelman and Friends and will surely be a night that neither the guests or people watching will ever forget.

Take a look at the teaser here.

1) The Bridgetown Comedy Festival (@bridgetown on Twitter) in Portland (it’s a big festival that relatively close to LA) has been officially announced!!! I.E. April 21st-24th with some of LA’s best including Kyle Kinane, Brent Weinbach, James Adomian, Jimmy Dore, Moshe Kasher, Mike Phirman, Jan Davidson, and much more!!!  More details to come as we get them here at the Comedy Bureau.

2) #HigherStakesChildrensBooks-hilarious way to get through Tuesday on Twitter.  Follow this hashtag to find stuff like this “@pattonoswalt Blueberries for Salo: 120 Day of Sodom” (may or may not be NSFW)

3) What to Watch/DVR This Week via Splitsider

4) Want to win guest spot on the Longshot Podcast w/Eddie Pepitone, Sean Conroy, Jamie Flam, and Amber Kenny?  Make a video and you could be famous* (*amongst comedy nerds)

5) This Town is Big Enough for the Both of Us… and Even More-where the new comedy haunts in LA are.

8) Gilbert Gottfried got fired from Aflac as their spokesperson through tweeting what were deemed as offensive jokes about the recent disaster in Japan.  Given the current state of the insurance industry, I’m pondering when they started caring about image?