In Memory of Gene Wilder, ‘Young Frankenstein’ Will Screen in Over 500 Theaters With a Live Introduction from Mel Brooks

In Memory of Gene Wilder, ‘Young Frankenstein’ Will Screen in Over 500 Theaters With a Live Introduction from Mel Brooks

Thanks to Fathom Events, this might be the most special one-night only screening of Young Frankenstein other than the premiere.

On Wednesday, October 5th, Mel Brooks and longtime friend and collaborator of Gene Wilder’s will introduce, live, one of their greatest works together, Young Frankenstein screening over half a thousand theater screens around the country.

If you didn’t get to catch Brooks at Radio City Music Hall recently, this might be the next best thing.

Dozens of AMC theaters have requested prints of the classic Gene Wilder films Blazing Saddles and Willy Wonka and The Chocolate Factory to play this Labor Day Weekend and will be screening either film in limited engagements on Saturday and Sunday.

Whether you’ve seen them already or not, you should go watch both in theaters and experience that Gene Wilder magic twice more.

One of the people that knew Gene Wilder best was Mel Brooks.

With the unfortunate passing of Wilder happening this week, Brooks went on The Tonight Show and shared his fond memories of Gene and their collaborations on some of the comedies that time will never forget. 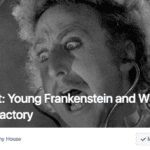 Trepany House at The Steve Allen Theater presents an evening in honor of the late Gene Wilder, this Saturday, September 3rd at 8PM, complete with a Wilder double feature of Young Frankenstein and Willy Wonka & The Chocolate Factory as well as a Wonka/Young Frankenstein costume contest.

The rest of our listings for comedy shows/events as well as open mic and maps are embedded at www.thecomedybureau.com.

Gene Wilder Gave The Nicest ‘No’ Reply to James Corden

The passing of Gene Wilder yesterday brought to the forefront how magical of a person he really was, both on and off camera.

James Corden shares a story where even in being turned down by Wilder, he’s still filled with wonder.

Gene Wilder had a hand in some of the most iconic comedic films of all time including Blazing Saddles, Young Frankenstein, and Willy Wonka and The Chocolate Factory. Today, he has passed away apparently due to complications stemming from Alzheimer’s disease.

Whether you’re familiar with his work or not, you should definitely rewatch or watch, discover, and be amazed for the first time by his long and storied filmography.