Glad That “This Is Not Happening” Is Indeed Happening 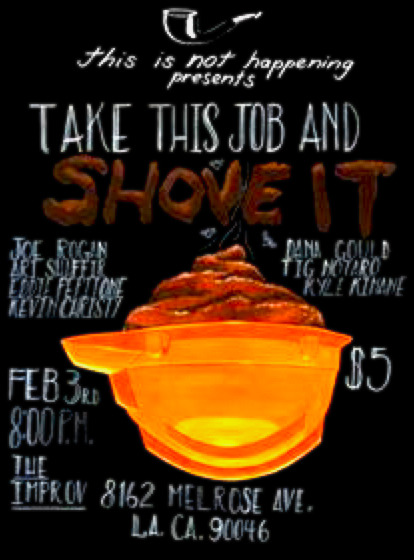 There has always been a “universal” quality about storytelling, especially the kind that is live, done in person.  Any story has the potential to be captivating through unflinching honesty and keen craftsmanship even if its told behind a high school cafeteria.

The stand-up/storytelling series “This Is Not Happening” magnifies how amazingly hilarious stories can be when already tried-and-true comedians shed the veil of their act and spin quite the yarn in front of a packed house at the Hollywood Improv Main Room.

Whether it be Eddie Pepitone yelling about working for a legally blind man, Kyle Kinane working for a charming racist, or even Tig Notaro calling herself out on an intentionally drawn-out, bland story, each one of the comedians, who are already hilarious just telling jokes (i.e. former Simpsons writer Dana Gould), maintained a sense of being around a campfire telling stories as if we were all friends except there was around 200 of us, which made every twist and turn even bigger and subsequently more gratifying.

Many comics fear delving into storytelling as the long bouts of silence that can potentially come with doing so, but I would argue that many of those tense expectations that the audience has for someone to be funny and the performer has for the audience to laugh melt away as they’re just purely honest.  Kevin Christy, with his hysterical story of how faithful he is to his wife, did this by being wonderfully unapologetic for how much of a “straight edge” he is and, as a result, left the audience laughing heartily between every turn.

Hosted efficiently and very enjoyably by Ari Shaffir and finely produced by Eric Abrams, This Is Not Happening takes the model of a storytelling show and betters it with a very sizable crowd and a theme, tying every comedian’s stories nice and neat into a package manifested in the image, on this particular show, (on the flyer above designed by aforementioned comic Kevin Christy) of a pile of feces in a hard hat.  The delightful theme to inspire such an image was: Take This Job and Shove It.  Feces in a hard hat is sort of revolting as an idea, but one that really is universal to the human experience, at least since construction jobs were developed, and hilarious in story form with dozens of people listening, making This Is Not Happening something that I’m quite glad “actually happens” and I have the privilege to see.

This is Not Happening frequently takes places at the Hollywood Improv.  Check back at the Comedy Bureau for details on the next one.