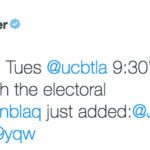 Do you want to hear some insightful discussion (and probably some sh*t talk) on the Electoral College? Would you like that to be done by the likes of a history professor and the hilarious Moshe Kasher, James Adomian, and Baron Vaughn?

If your answer is yes, then tomorrow at UCB Franklin is the show for you as Moshe is recording his discussion podcast Hound Tall focusing on that very topic with those very guests.

Given this moment in history, comedy will play a crucial, fascinating role in the weeks, months, and years to come in both speaking truth to power and also assuaging fear.

Much of stand-up comedy leans left and had plenty to say about Trump through this election cycle and will have plenty to say coming up.

In fact, Wyatt Cenac made his latest set at his show Night Train, which were his musings on Trump winning while they were still fresh and raw, into a whole album called One Angry Night in November.

On top of being the first comedy album about the election to come out, it’s 16 minutes and change long and free.

So, without further adieu, get One Angry Night in November here.

And Now, Chris Fleming Presents His Own Election Silver Lining

Like so many comedians right now, Chris Fleming is trying to make sense of a Trump/Pence win in the election and then processing it, as quickly as possible somehow, into comedy.

With a day of reflection past us, Fleming has managed to find his own “silver lining” in the new America that awaits us all in January.

Watch it here and you just might feel better for a few minutes (that is if you were with her).

With four years of a Trump administration lurking in the coming months, Full Frontal with Samantha Bee, along with Last Week Tonight with John Oliver are probably going to be bigger deals than they already are (perhaps even as big as The Daily Show with Jon Stewart)

Conan O’Brien on Being Thankful We Even Have Elections

Tonight’s episode of Conan, like any other televised program will be doing for the next several weeks, months, and years, put in his two cents on yesterday’s election results.

In contrast to Colbert’s sobering sign-off, Conan takes a silver-lining approach and, as is his contingency plan when things seem to take a turn for the worst in the country, shows us some great, wonderful, pure silliness. 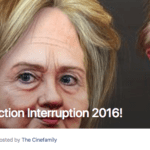 Kate Berlant and John Early are stepping in for Doug Benson to interrupt election coverage on Election Day over at Cinefamily.

A potluck starts at 6PM and the interrupting starts at 7PM. Get more details here.

The Weather Channel to Have a ‘Chill Marathon’ on Election Day

The Weather Channel to Have a ‘Chill Marathon’ on Election Day

Taking cues from The Puppy Bowl that airs opposite The Super Bowl, The Weather Channel is looking to be your refuge on November 8th, which sure might be one of the most insane days in U.S. politics in this century.

From 12PM PDT to 9PM PDT next Tuesday, clouds, rainbows, smooth jazz, “autumn splendor”, and more look to soothe citizens of America on The Weather Channel after potentially hearing about Trump poll watchers incite violence like Trump supporters do at their rallies, unending flows of misogyny, racism, xenophobia, etc.

Between this, The Chris Gethard Show Election Special, Stephen Colbert’s Live Election Night: Democracy’s Series Finale: Who’s Going to Clean Up This Sh*t?, and Hillary winning, America can hopefully have a great night next Tuesday.

Adam Ruins Everything to Ruin the Election in TV Special Tonight

While so much of this election is unbelievable, Adam Conover and the good folks at Adam Ruins Everything are going to show that there is precedence for the craziness of this year, effectively “ruining” whatever you were misconceptions you were having about politics being the way it is now.

The Adam Ruins Everything Election Special premieres tonight at 10PM on TruTV.

You can always count on Stephen Colbert for catchy titles.

The live election day special that Stephen Colbert will be hosting over at Showtime, as opposed to The Late Show over at CBS, will begin at 8PM PDT on Election Day Tuesday, November 8th.

This very first promo is a hint that Colbert will be definitely making use of the lack of censors.

Well, it might be just perfect timing for a new election themed special from Robert Smigel and Triumph the Insult Comic Dog as the almost 64 million people that watched last night’s presidential debate are still trying to stop their head from spinning.

Triumph’s Election Watch 2016 just started streaming on Hulu over the weekend and not only focuses on Trump and Hillary, but Gary “Aleppo Moment” Johnson.

If you have a Hulu account (remember Hulu isn’t free at all anymore), you can watch it here.