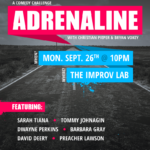 Here, comedians are challenged to try doing jokes while one of many challenges including anything from singing their jokes to not being allowed to say “the” or “uh”. Odds are that’ll get their adrenaline pumping, hence the name.

Fundraiser for my next film! Two shows! Tonight! http://t.co/EIN80CPUHB pic.twitter.com/hyPRiYNnIC

With only one month in the books, there’s plenty of comedy specials that we’ve already gotten or are about to getting into including ones from Louis C.K., Kyle Kinane, Bridget Everett, Al Madrigal, Aziz Ansari, and Matt Braunger.

Add to that list one from the very funny Dwayne Perkins that he shot at the Japanese American National Museum here in LA last month. There’s no set premiere/release date, but you’ll want to catch it as soon as it comes out, hopefully some time this year.