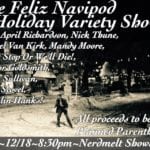 OK, how often are you going to great a comedy benefit show that’s supporting Planned Parenthood that will be in the back of a comic book store that will have Mandy Moore and Colin Hanks on the bill AND have a fun name like Feliz Navipod?

As far as we know, it’s just The Feliz Navipod Holiday Variety Show! happening next Monday at Nerdmelt Showroom.

Oh, There’s Also This Great New Music Video From Don’t Stop or We’ll Die, The Band Harris Wittels Was a Drummer For

Don’t Stop or We’ll Die was another example of the wonderful silliness that emanated from Harris Wittels. He played drums for the band that walked a fine line between solid pop and comedy along with Paul Rust and Michael Cassady.

A great music video for their song Lisa was just released today.

Don’t Stop or We’ll Die Has a New Album

Don’t Stop or We’ll Die Has a New Album

It’s available on iTunes and we think you should get into it. Are you not going to take a listen to a band with working comedy folks Rust, Cassady, Wittels? Come on.