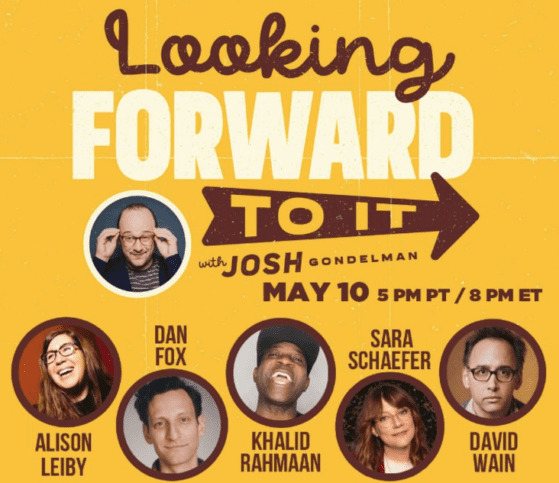 Pick of the Day: Looking Forward to It with Josh Gondelman (in Support of Fair Fight) 5/10

So, state by state, it seems as though new restrictive voting laws are being put in place and enacting how little the voting body of this country is and who gets to be part of it (Florida is the latest perpetrator, FYI). Don’t be mistaken; it’s turning back the clock of history and moving forward as a society.

With that in mind, one should always be in attendance and support the marvelous comedy show Looking Forward to It with Josh Gondelman as it is a show dedicated to both continuing the fight for voter engagement and representation in the very crucial years to come and give you a top shelf night of comedy. This month, one of the most effervescent comedians around, Josh Gondelman, will assemble the brilliance of David Wain, Sara Schaefer, Khalid Rahmaan, Alison Leiby, and Dan Fox and raising money for the amazing efforts of Stacey Abrams’ Fair Fight.

Get in on the fun and the fight with your tickets (starting at a $20 suggested donation) here. This edition of Looking Forward to It with Josh Gondelman goes live on Mon. May 10th at 5PM PT/8PM ET, presented by Nowhere Comedy Club on Zoom. 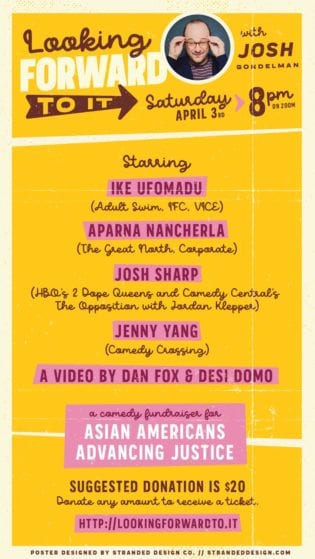 Pick of the Day: Looking Forward to It with Josh Gondelman 4/3

It you’re looking for beacons of hope in comedy, one of the brightest of them is none other than than Josh Gondelman. Not only does his award winning comedy (he just snagged a WGA Award for his work on Desus & Mero) bring light and joy through his clever attention to detail, but he has repeatedly put his comedy out there in service of worthy causes.

As of late, he has been the host and face of a monthly comedy live-stream Looking Forward To It that is specifically dedicated to voter engagement past this most recent general election here in the U.S. This particular month is special as Gondelman along with a fantastic line-up of Ike Ufomadu, Aparna Nancherla, Josh Sharp, Jenny Yang, and a video by Dan Fox & Desi Domo will be raising money for Asian Americans Advancing Justice (it’s still a pretty important issue, FYI).

This lovely edition of Looking Forward to It is set for Sat. Apr. 3rd at 5PM PT/8PM ET. Tickets/access are available via a donation ($20 suggested).