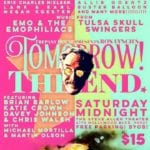 Over 13 years, Ron Lynch has faithfully kept one of the best comedy variety shows featuring stand-up, sketch, characters, clowns, magic, bands, carnies, and other weirdos in LA, The Tomorrow Show, going every Saturday night at midnight.

Well, the time for their swan song has unfortunately come, but what a swan song it will be.

The very last Tomorrow! with Ron Lynch will be this Saturday at midnight full of their main players, best and brightest, all time favorites, old friends, comedy legends, etc.

Do not miss out. Please get your tickets here.

1) Marc Maron’s “This Has To Be Funny” is out today! Download at the link or if you can find it in a store, something, anything.

2) Thomas Lennon, Robert Ben Garant, Ed Asner, and more have had enough of the environment already…

Stop The Environment from Ed Asner

3) The Onion will experiment with charging readers for online conent.

4) The LA weekly writes about the Tomorrow Show as Ron Lynch and company deserve it.

7) Patton Oswalt in another 5 Second Film!!!

8) An article we wrote for the Nerdist on how SEO has possibly ruined comedy is according to “Matt” is “…a boring, pointless, empty article,” further adding, “Nothing worse than a comedy critic. Get a job.” Apparently, he liked the Les Misérables parody of Jay-Z’s & Alicia Keys’ “Empire State of Mind”. To each his own.

9) Fuck yeah Down’s Syndrome Association of the UK, you bet Doug Stanhope isn’t going to apologize for his rant against Sarah Palin and her DS baby (another piece we wrote yesterday for Laughspin).

4) Everyone is saying that the 30 Minutes or Less Red Band Trailer is giving away too much? Well, at least they’re giving away that it might be worth watching:

5) This week’s “Tip of the Hat” goes to Sean Patton.  Look for the article/profile coming soon.

6) Favorite Season 1 Recap of Comedy Show of the Week: The Good Luck Show!

9) Will Dave Chappelle Ever Really Make a Comeback? [via Punchline Magazine]

13) Saw a “comic” point out noises instead of telling jokes or do ANYTHING because apparently we weren’t on board with his weirdness, which he didn’t approve of, and then cut and run right after his set.  If he was trying to make sure that people won’t come to his shows where his name is on the bill, he’s doing a damn good job.

1) TJ Miller is going to be the lead in a movie! [via Hollywood Reporter]

4) Tonight (if you don’t feel like going out to support live comedy) there’s Jeff Garlin making an appearance on Conan 11PM on TBS and the first night of the premiere of Jon Benjamin Has A Van 10:30PM on Comedy Central.

5) Independently produced Beer in the Shower has a new location starting tomorrow at Dreams Cafe (5625 W. Sunset Blvd., Hollywood, CA). It’s still free it still has a hell of line-up with Kyle Kinane, James Adomian, Baron Vaughn, and more, AND it’s only a few blocks from the original location.  Don’t miss out, tomorrow 9:30PM.

6) I got a chance to catch the Tulsa Skull Swingers composed of hilarious people in their own right: Craig Anton, Ron Lynch, Blaine Capatch, and Amit Itelman at 3 Clubs last night. Simply amazing. Imagine Link Wray retrofitted for a comedy variety show and you’ll start to get an idea… Stay tuned here at the Bureau for details about their next month.

7) Art and Slapstick Comedy: Josh Fadem and his pratfalls.

8) The 2 & 45 @ All Star Lanes on Mon. July 18th at 8PM will feature Brandie Posey and Barbara Gray both doing 45 min. sets.  This could very well be one of those “I saw them back when they were performing at a bowling alley in Eagle Rock” type of moments.

12) So, the funniest things I’ve said in 2011 have been “These are the times when I want a bucket of chicken to throw at people I hate,” and “I write about comedy and I suck at it.”  OK everyone, I get the message.