Here’s another of our “secret” recordings from Comedians of Interest Vol. 1 (out tomorrow, FYI) from one Candice Thompson. Again, listen carefully and you’ll hear why you need to have her on a list of comedians you need to keep a close eye on everything that they do (i.e. go see them live, listen to their podcasts, watch all their videos, etc.)

Also, again, you can pre-order/buy Comedians of Interest Vol. 1 from AST Records here. 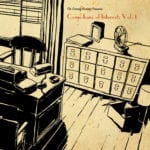 Coming soon from our “personal archives” (in collaboration from our good, good friends at AST Records) will be our very first compilation album, Comedians of Interest: Vol. 1.

It’s a collection of “secret” recordings at various “hidden” locations in the LA comedy scene of the comedians that you need to most be on the lookout for.

We’ll be releasing details (as well as an album release show/party that coincides with our 7th Anniversary) over the coming weeks.

For now, we can only tell you that Comedians of Interest: Vol. 1 will be released to the public on Friday, October, 20th.

Earlier this year, we reported that one of favorite comedians Andrés du Bouchet would be not only releasing his 2nd album, but that album would be a 2 hour long compilation album of different bits and characters performed at several different places.

Well, now, Nov. 25th is when 20 Sided Guy will come out from AST Records and mark that date down on your calendar for when you will buy the album, laugh heartily and simultaneously have your mind blown.

2776, The Comedy, Music, Historical Retrospective Extravaganza for Charity Is Here

2776, The Comedy, Music, Historical Retrospective Extravaganza for Charity Is Here

The Levinson Brothers and Rob Kutner’s compilation album, 2776: A Millennium of American Asskickery spanning the world comedy and music to tell the “story” of the U.S. of A. is now available for you to buy and listen to.

Not only will you get the sounds of Reggie Watts, Aimee Mann, Triumph the Insult Comic Dog, Patton Oswalt, Aubrey Plaza, Maria Bamford, Alex Trebek, Paul F. Tompkins, Yo La Tengo, Will Forte, and more, you’ll also be supporting OneKid OneWorld. So, go support, listen, and enjoy like you know you’re going to.