comedians you should know 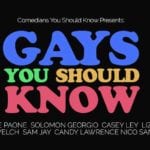 The regularly scheduled Comedians You Should Know is bringing a very special edition of their show next week on Thursday, February 23rd at 10PM at The Hollywood Improv Lab. As the name suggests, these are all gay comedians from around LA that you absolutely should know and go see perform on a regular basis.

Chicago’s “Comedians You Should Know” Expanding to LA

CYSK is just the latest in a great trend of comedy shows expanding across the country and specifically having a version of their show in LA.

San Francisco’s The Business, Cincinnati ’s Underbelly, and NYC’s Gandhi, Is That You? and Fresh Out, are just a few shows that have kept their flagship shows going in their hometowns, but have expanded to have a regular show here in LA. There are even more shows in the LA comedy scene that have just moved to outright to LA from elsewhere like Hot Tub with Kurt and Kristen.

Chicago comics have rooted themselves quite well in LA. From people a year or so in all the way to Kyle Kinane, there are more comics in LA who started in Chicago than comics who actually started comedy in Los Angeles.

So, CYSK will be undoubtedly be a welcome monthly addition to the scene starting Apr. 30th at 9:30PM at Genghis Cohen, hosted by CYSK’s Joe Kilgallon. You can and should get tickets here.