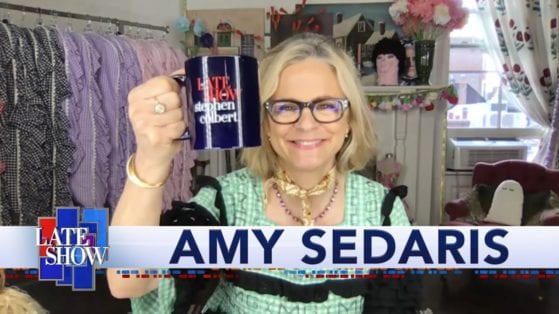 The pure, unfiltered joy of Amy Sedaris is a beacon of hope, not unlike a lighthouse, and it’s a blessing that her splendidly bizarre crafting-ish series At Home with Amy Sedaris is returning to TruTV tonight.

Leading up to the season 3 premiere, Sedaris chatted remotely with her dear old friend who just happens to be the host of The Late Show Stephen Colbert reminiscing about their salad days. The benefit of Sedaris being at home is that she can actually show every memory that she has collected. Also, she gets to show how nifty she can really be at crafting, leaving Colbert a bit in the dust.

We gave one of 100 best of 2019 slots to one Pedro Gonzalez because he was so damn good at crafting jokes regardless of him learning English as a second language.

Well, here’s Pedro doing just that very thing yet again on last night’s Colbert, so precise with misdirection and timing. It’s a beautiful thing to watch.

Kate Willett is another one of those cases where she is so damn funny and has been for such a long time and having plenty of specials and TV sets under her belt that we kind of can’t believe this set on last night’s Colbert was her first time on network television.

Yet, here we are. So, please enjoy another round of Kate’s smart, sex positive humor right here.

Well, we’d like to say that we gave you fair warning that Candice Thompson was on the rise a few years ago with our compilation album Comedians of Interest Vol. 1 where she was one of six personally handpicked acts.

Now, she has two late night sets under her belt along with writing on the new David Spade late night show, Lights Out.

So, this is just another friendly reminder to hop on board the  Candice-Thompson-train as it’s pretty great. See for yourself with this set from last Friday’s Late Show with Stephen Colbert.

Though he kind of has the voice and cadence of some kid  trying too hard to do an impression of the Terminator, Daniel Simonsen plays off it and uses it  to his advantage in his offbeat, yet marvelous stand-up comedy.

This Colbert set from last night marks Simonsen making the rounds in late night as he already has a set from Seth Meyers under his belt.

Thomas Lennon Attempts to Debut His New Children’s Book with Some Clips (?) on Colbert

Yes, Thomas Lennon has just come out with a children’s book entitled Ronan Boyle and the Bridge of Riddles.

This bit was what he decided to do to promote the book with his appearance on The Late Show with Stephen Colbert and it might just be enough for you get to the book even if you don’t have kids. Props to Lennon and Brian Stack for this madness.

If you haven’t heard our praises of Byron Bowers over the years at TCB, we hope that this set on last week’s Colbert will fix his name in your memory as he is a wholly original voice and cut from such a unique, completely genuine cloth of comedy.

Also, the way he opens might be one of our favorite openings to a late night set ever.

Emma Willmann returned to Colbert last week for her second set on The Late Show and really showed us all the finer nuances of inner-relationship dynamics within the LGBTQIA community.

Also, Emma just saying that she’s the “man one” in the relationship over and over is pretty fantastic.

In anticipation of their Live in London HBO special, the Flight of the Conchords gave a preview of what’s to come via a performance of their yet-to-be-released song Father & Son on last night’s Colbert.

Perhaps, this is FOTC’s answer to the legendary Cat’s in the Cradle and how that also might go awry? Watch and enjoy it here.

Katie Hannigan’s Exuberance Is Undeniable in Her Late Night Debut

Coming fresh off of being an unrepped New Face at JFL Montreal, Katie Hannigan shows Colbert’s crowd at The Late Show what a handful of industry folks got to see just a week or so before.

She has such a magnetic persona and delivery that contrasts perfectly with her material about her life, making it a real joy to watch this late night debut.

See the set for yourself here.

Danny Jolles Makes a Case for the “Bro” on Colbert

In his TV stand-up debut, Danny Jolles delivers an argument for the oft-maligned group commonly referred to as “bros”.

Jolles, who loves deconstructing opposing opinions in joke form, certainly weaves his points into a finely crafted set that you really ought to watch instead of, perhaps, already getting suspicious because it’s a “bro defense”.

Hank Azaria, The Voice of Apu on The Simpsons, Says He’s Willing to Step Aside from Apu to Include South Asian/Indian Voices

With everything that The Problem With Apu, the documentary by Hari Kondabolu, has pointed out, then the in-episode response from The Simpsons, the resulting remarks and suggested resolution on the controversy from Hank Azaria who has voiced Apu Nahasapeemapetilon for decades is kind of beautiful.

On April 17th, former FBI Director James Comey will sit down with Stephen Colbert on The Late Show for an interview.

We’re not exactly sure what to expect, especially with how forthcoming Comey may or may not be about anything or how sobering or playful Colbert will be (our guess is probably both). Still, this has to be pretty historic as FBI Directors tend to not make appearances on late night.

Come to think of it, it’d almost be worth doing the episode live just to see if Trump would respond on Twitter in real time allowing Colbert and Comey to have a back-and-forth with POTUS who probably will have something more important to do.

The very first State of the Union Address will be delivered by President Trump tonight live at 9PM EST/6PM PST.

Of course, late night will not miss an opportunity to get right in on the aftermath as soon as POTUS finishes attempting (maybe) to speak like an adult.

So, The Late Show with Stephen Colbert will air immediately after coverage ends on CBS (meaning it’ll be primetime here on the West Coast). He’ll have the hosts of Pod Save America: Tommy Vietor, Jon Favreau & Jon Lovett, 2 Dope Queens’ Jessica Williams & Phoebe Robinson as guests.

Trevor Noah and Jordan Klepper will go for a one-two punch by both going live after the State of the Union with The Daily Show and The Opposition at 11PM EST/8PM PST & 11:30PM EST/8:30PM PST respectively.