Glad to see that Conan’s Andrés du Bouchet got to reprise his spot on creepy Butterscotch clown character for the upcoming release of the It Chapter Two sequel and really went all out for it (especially for Conan being at Comic-Con this week).

Most of all, you have to appreciate how Team Coco got away with the ending of this sketch. See it all for yourself here.

With another Emmy win for Louie, FX is smartly furthering their business with Louis C.K. as they have just picked up Baskets, executively produced by C.K., Zach Galifianakis, and Portlandia director Jonathan Krisel, to series.

Galifianakis will star as a man who leaves the corporate world to pursue a life of becoming a professional clown. So, maybe it’s hovering somewhere around Being John Malkovich minus all the body snatching with a focus on clowning instead of puppetry?

Either way, we have a really great feeling about this.

Comedy legend Jerry Lewis’ “The Day The Clown Cried” has been almost an urban legend  for simply being a movie about a clown that leads children to a concentration camp gas chamber and Lewis vowing for it to never see the light from a projector ever.

However, a featurette of the film showing Lewis on set doing a few takes from the movie as well as setting scenes has been uploaded to YouTube and while not revealing what the macabrely fascinated part of you would want to see, you can imagine what was only to follow.

It has hints of the documentary that should win the Oscar this year about surviving death squad leaders reenacting the murders they carried out decades later and their reaction to doing so, The Act of Killing, but for comedy.

May 19, 2011
Uncategorized
cheap, clowns, comedy shows, los angeles, los feliz, what to do 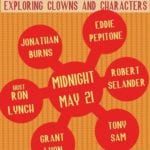 Tomorrow w/Ron Lynch and Clowns & Characters.  Normally, I’m one of those people that are uneasy around clowns, but no childhood fears will arise here.

This Saturday at Midnight at the Steve Allen Theater. Click through for tickets.