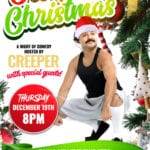 Frankie Quinones iconic character Creeper from the hysterical CholoFit™ workout video series is putting on a very special holiday themed stand-up comedy night at the wonderful Dynasty Typewriter at the Hayworth Theater. We have no doubt that you’ll get a workout from both laughing and whatever holiday “exercises” that Creeper is going to share.

The President Show Sings Us All an Existential Song for Christmas

On this Christmas Eve 2017, let Anthony Atamanuik and his President Show gang give us a nice “Christmas carol” to lead us into the actual day of Christmas.

By “Christmas carol”, we mean a darkly funny rendition of Aimee Mann’s “Wise Up”.

Watch, enjoy, and get into the “spirit” here.

Now that the holiday season is in full force, the line of holiday TV specials has already started.

Tonight, you might want to actually catch the Drunk History Christmas special as it includes the story of a Christmas Tree ban told colorfully by Rich Fulcher. 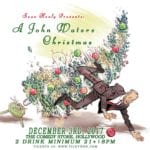 Legendary filmmaker and iconoclast John Waters performing his Christmas show at The Comedy Store is beginning to seem like a holiday tradition (and we’re totally on board for that).

Before You Wave Christmas Goodbye, Paul F. Tompkins Has a Great New Holiday Carol “Please Don’t Joke About ‘I, Robot’ This Christmas”

If you honestly look at a lot of the lyrics of Christmas songs, they too often are vague, steeped to deep in symbolic imagery, or throw around various positive platitudes all while wrapped up in a catchy melody.

This is not the case with the new country-leaning holiday song from Paul F. Tompkins, “Please Don’t Joke About ‘I Robot’ This Christmas”.

It’s very specific and very personal (and a tad bit silly sure).

It should be your new favorite holiday song as the 2016 holiday season comes to a close and something to enjoy at the end of 2017.

FYI, Andy Richter Controls The Universe fans (as well as fans of anything that Andy Richter does and his work on Conan), there’s an Andy Richter holiday special streaming next week on Seeso.

In case you’re not already on board, here’s a promo from Andy himself.

We Guess You Have to Enjoy Christmas, So Do So with Nick Lowe and Los Straitjackets’ “Christmas at the Airport”

We’re hoping you’re enjoying Christmas right now as it seems the majority of our staff stayed home today to do so.

As that’s the case, we’re just going to leave you to your Christmas plans with one of our favorite alternative holiday songs, Nick Lowe and Los Straitjackets’ “Christmas at the Airport” performed live on Conan earlier this month.

With all the resources you could possibly want when pulling pranks, John Krasinski and Jimmy Kimmel once again go at it, this time prank-a-prank.

For those that missed the pranks from The Office, the spirit of Jim Halpert lives on here.

How To Regift by John Oliver and Last Week Tonight

John Oliver and the team at Last Week Tonight has a solid solution for at least one crisis in this country that we can manage.

FYI, be on the lookout for which camp is mentioned when there’s a camp joke since Last Week Tonight segments have their own so-called ‘easter eggs’.

Jim Gaffigan Has the “Perfect” Gift Guide For Your Family

Let comedian and family man extraordinaire Jim Gaffigan show you “exactly” what to get anyone that you’re shopping for in this segment from last night’s Tonight Show.

Horror, Comedy, and Christmas Collide in Trailer for “Krampus”

Dec. 4th will see another go at a Christmas horror movie. Rather than accidentally being funny, the movie is being touted as a horror comedy for Christmas and having Adam Scott, David Koechner, and Toni Collette will certainly help that genre blend out greatly.

Watch the trailer here before you go down a Wikipedia hole of holiday themed monsters.

Conan O’Brien has made it his business over the years to offer a place where celebrities can divulge their “secrets” that they have been “hiding” for years.

So, it would only stand to reason that legendary holiday season icon Santa Claus would choose Conan and nowhere else to reveal the things that torment him so.

Watch parts one, two, and three of Santa Secrets.

It would seem that Conan O’Brien might be on to a holiday tradition of having budget friendly tips to celebrate the holiday season from his propmaster Bill Tull. There were some great tips from 2013 and there are more for this year’s holiday season.

And by holiday season, we mean any holiday is a good holiday for Bill Tull’s tips.

While this is certainly something we wouldn’t have guessed for Murray’s next project, we’re surprised that it taken years after Lost In Translation for any thing of this nature to happen with Bill and Coppola. Now that the plans are in motion, we’ll all be very happy to have something to watch that isn’t TV series binge watching we haven’t done during the rest of the year.

There isn’t details as to where it will air or a specific air date, but we’re sure that you’ll check your DVR constantly to make sure you won’t miss it.