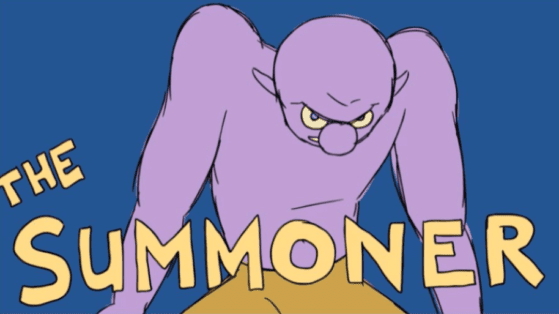 SYFY keeps beefing up its own late night animation block TZGZ (not too unlike Adult Swim is for Cartoon Network) and it seems to get more and more enticing with every new show they order. The latest addition comes from Charlie Hankin and Stoopid Buddy Studios and is called The Summoner.

We’ve followed and thoroughly enjoyed Hankin’s work for awhile now whether it be animating cartoons for The New Yorker or being one half of one of our favorite sketch duos Good Cop Great Cop. Hankin has such a great knack for finding absurdist minutia to tap for humor. This series caters to that strength perfectly as it centers on a pair of roommates, one of which is an alien that can summon any object, but never summons anything useful.

Three episodes of The Summoner are set for next year and we won’t be surprised if SYFY keeps adding even more series to TZGZ over the coming months to become an even more formidable animation block to tune into.

Good Cop Great Cop Is Back with “Cube”

One of our all time favorite sketch duos is Good Cop Great Cop, comprised of the quiet brilliance of Matt Porter and Charlie Hankin. For years, they made so many damn great sketches, then made a great CC digital series with New Timers, then seemed to be on a sort of hiatus.

Thankfully, they’re back on releasing new videos pretty regularly. This latest one “Cube” is particularly great. Watch and enjoy it here.

One of our favorite sketch groups Good Cop Great Cop make their version of a Black Mirror episode with their latest sketch “Important”.

Their latest work “Talent” highlights high they expertly toe the line of the real world and a darkly comedic one.

Get a look of how they’ll chill out a few more hundred days after the world ended in this trailer, then look new episodes online from Comedy Central this Fri. Sept. 18th.

If you enjoyed WOMEN or If I Was In It on the IFC Comedy Crib, then you might enjoy this next batch of comedy web series coming soon.

IFC just announced their next run of comedy series which includes:

Imagine what the premise could be for all of these, then look forward to seeing if you were right soon.

There isn’t an app for that type of honest dating, which would save a little more time, but, for now, you can imagine what that would be like in this sketch.

When transported to a fantastical world with knights, dragons, sorcery, and more, people playing Dungeons & Dragons are usually comfortable being in their element.

Leave it to Good Cop Great Cop to find a way to inject awkwardness in what should be a nice escape in reality with weird dice.

MTV Other’s Door Boys from Good Cop Great Cop have a lot of time on their hands, so, it would be reasonable to assume that they would get the order of movies in The Star Wars franchise mixed up.

It’s not confusing to the rest of us that IV is first and I is fourth, right? Even if it is, just watch the latest episode of Door Boys here.

Matt Porter and Charlie Hankin have done many things that we’ve enjoyed here at The Comedy Bureau over the years. They both comprise the amazing Good Cop Great Cop and have made the grounded post-apocalyptic CC:Studios series New Timers.

Now, Matt and Charlie have cooked something new for MTV Other called Door Boys. Technically, they play door men, but, given how their disposition towards the gig, they more accurately are door boys.

We feature Good Cop Great Cop (Matt Porter and Charlie Hankin) and their absurdly wonderful stuff here quite a bit. Just watch this video or this one.

Now, Matt and Charlie sat down with the New Worlds documentary series to give a greater explanation of the what and the how and the why of what they do as Good Cop Great Cop. Watch it here.