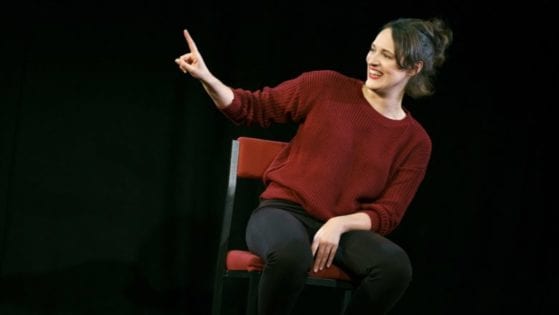 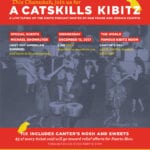 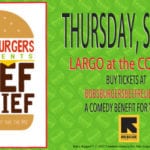 The voices behind Bob’s Burgers including Kristen Schaal, Dan Mintz, Andy Kindler, Ron Funches, Zach Galifianakis, Laura Silverman, and Will Forte along with Jon Lovett (Lovett or Leave It) will be putting on a charity benefit show, BEEF RELIEF, for the International Rescue Committee, IRC, with a focus on providing relief for the current famine in and refugees of Yemen. If you’ve got a few grand in spare change (tickets are currently going for $2850), you can snag one of the few hundred tickets available here. 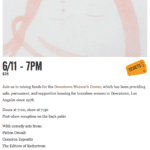 1) This is real.
2) The idea for this did come from author/actress/comedian Sara Benincasa experiences of watching an episode of American Gods and going to Cheesecake Factory blending in her subconscious (via Eater)
3) They’ve already raised $68,707
4) Here’s Neil Gaiman performing a commencement speech in case you forgot how lovely his voice sounds.
5) Here’s the Cheesecake Factory menu in case you forgot how massive and indulgent it is.
6) They’re trying to reach the goal of $500,000 by June 20th, World Refugee Day.
7) Again, this is real.
8) Donate to this delightfully silly and great thing here on CrowdRise. 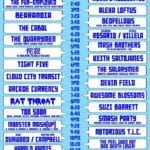 One Jason Van Glass will be attempting to do 10+ hours of improv at The Clubhouse this coming Wednesday.

That might be breaking some kind of record. Even if it’s not, it’s an impressive feat to take on and he’s doing it for a great cause (collecting donations for the Southern Poverty Law Center) AND will have a great line-up of fellow improvisers joining him throughout throughout the whole run. 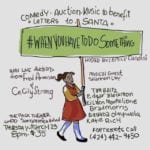 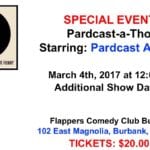 This is just a friendly reminder that Never Not Funny’s Pardcast-a-thon is just around the corner. Jimmy Pardo, Matt Belknap, Pat Francis and a cavalcade of special guests will do 12 hours of great “pieces of business” to raise money for Smile Train.

Over the years, the Pardcast-a-thon has raised well beyond a half a million dollars for the charity that aids children in developing countries with cleft palates.

Tickets have been sold out for awhile now, but you can stream the whole thing and donate at nevernotfunny.com on March 4th starting at 12PM PST.

A bunch of LA’s comedy best and brightest (including Dave Ross, Sean Keane, Kate Willett, Brandie Posey) got together at a house and recorded a comedy album called Burn This Election that might be exactly what you need right now.

Here’s a juicy taste of it.

In light of the results of yesterday’s election, not only might you want to hear great jokes decrying Trump, but you probably want to support a cause that stands against him and his actions.

You can get and listen to your own digital copy here.

By the way, the sweet album artwork is by Sean Keeton.

Tim Kaine, the fluent Spanish, very affable VP pick of Hillary Clinton, has been received quite nicely by many Democrats.

In fact, it has inspired one notable comedian/author Sara Benincasa to write and publish fan fiction based on Sara’s idea of Tim Kaine being “ the world’s nicest dad who just wants you to stay safe and have a nice time out there”, which she is aptly calling Tim Kaine Is Your Nice Dad.

Half of the proceeds from this book will go to Great Expectations, a VA non profit that helps foster kids go from community college to the workforce.

If the idea of Tim Kaine fan fic sounds good to you, you can get it on Kindle here.

When it comes to combining raising money and doing so through a well thought-out prank, few are better at combining the two than Stephen Colbert.

So, when Donald Trump mentioned how he once received a small loan of a million dollars, Colbert sprung to action and has issued a pretty ingenious challenge to the Donald.

Details, tickets, and a chance to attend the Trainwreck premiere can all be found here.

As part of the gigantic annual benefit for autism programs known as Night of Too Many Stars, The Simpsons are offering up the chance to win a guest role and be drawn into an episode of the legendary cartoon. In addition to that, you’ll get a print of the Simpsons version of yourself signed by Matt Groening himself.

Depending on the amount you donate at Omaze.com, you can better your odds to win this unprecedented prize. You have just over a month to enter into this contest.

Starting now through Apr. 1st, you can bid for Doug Stanhope’s stuff that he doesn’t want or need on eBay and Stanhope is going to give some of the money charitably to someone who is really down on their luck versus some organization.

Buy some cool memorabilia and it will probably be on hell of a story behind the person Stanhope is going to donate to.

As you’d imagine the man behind or with a significant role in making Community, Rick and Morty, Channel 101, Starburns Industries, Harmontown and more, Dan Harmon, has plenty of great memorabilia probably lying around his house/office/etc.

Well, Harmon is auctioning it all off live, QVC style, via Cogo.tv to benefit 826LA this Sunday. So not only will you be impulse buying, but you’ll be supporting a good cause.

If you’re not doing the whole Black Friday thing, enjoy the fun of the 2013 Jimmy Pardo’s Pardcast-a-Thon being livestreamed at the link and use that money you might have spent on doorbuster deals to donate to Smile Train, the charity Pardo has been supporting with Pardcast-a-Thon for years.

All Things Comedy’s Bill Burr and Al Madrigal are set to host a garage sale of stuff via Laffster tomorrow they don’t need anymore, which should be endless entertainment on it’s own, for the Wounded Warrior Project charity.

Check out the sale tomorrow for the simple fact that you get to see Bill go through old stuff and you’re benefitting the troops.