Many Canadian comedians get great exposure and income from royalties off of play of their stand-up on things like SiriusXM Canada, especially because of the fact that there are mandates by the Canadian government that guarantee a certain percentage of airtime for Canadian artists on Canadian broadcasting.

That ecosystem was potentially going to get upended under a new deal between Just For Laughs and SiriusXM Canada that would allow non-Canadian comedians to be featured on “Canada Laughs”, a 100% Canadian comedy channel. Fortunately, the “Canada Laughs” channel will stay 100% Canadian after the uproar that was raised this week from comedians around the world and the set up for royalties will remain the same.

That affects many of the Canadian comedians that live here/frequently spend time in LA and this decision that was just reached will allow them to keep a steady income stream and reach an audience that they might have not gotten any other way. 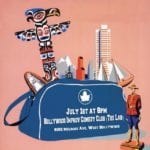 Sure, the Fourth of July is this week, but you’ve got tip your caps to Canada, which seems like they’re doing much better than us Americans right now.

So, for Canada Day, why not go see some of the funniest Canadians that thankfully are residing in LA (that includes Kids in the Hall’s Scott Thompson).

Ever since Debra DiGiovanni arrived in LA, she has destroyed stage after stage often prompting many other comedians on the line-up to not want to follow her. Debra’s undeniable charm and rapid fire cadence pretty much has every watching her busting up from the get go. She’s absolutely one of the best folks to come down from Canada

Lady Jazz, her latest release fresh off the presses from AST Records, showcases these abilities and more in a big theater and definitely is worth a listen (probably more than a few actually).

Get Lady Jazz from AST here.

One of Canadian’s best exports to the United States, in our humble opinion, is, without a doubt, Debra DiGiovanni. While she wildly popular in Canada, she is now making headway stateside having made her way through a few rounds of Last Comic Standing and, as of last night, had her American late night debut on Conan.

Please watch and enjoy Debra like we’ve had the pleasure of doing so over the last couple of years.

From the end of this month until December, the brilliant Emily Heller will be stopping in Montreal, Dublin, Toronto, Texas, Vermont, Indiana, Virginia, and San Francisco for festivals, shows, etc..

If you’re anywhere near those places for her the dates that she’s playing, do yourself a favor and watch her perform. 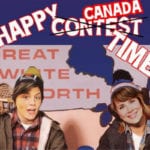 Ever Mainard and Deborah Etta Robinson (pictured above) host this giddy evening that will have Americans trying to please Canadians.

Happy Canada Time will happen this Tuesday, January 31st, at the Hollywood Improv at 10PM. Tickets are $5 and you can (and should) get them here.

These are the sort of lists that the Internet should be getting into.

Mark McConville, whom we’d hope you’d know from Superego, has been compiling really niche lists that are some of the funniest lists we’ve come across on the web.

When you get a chance, check out:

Also, you should be following Mark McConville on his Tumblr for more of these nuggets.

It’s a trend now that big music and arts festival have a solid comedy line-up and we’re definitely on board for that.

The Pemberton Music Festival that’s set to take place in Pemberton, British Columbia from Jul. 16th-19th is taking cues from SXSW, Bonnaroo, Outside Lands, Sasquatch, and more to have comedy alongside their massive music line-up.

So, next to the likes of Kendrick Lamar and The Black Keys, The Pemberton Music Festival line-up also has:

Now that we’ve peaked your interest, you can get your tickets right here.

Just For Laughs Going on Tour Across Canada This November

No longer will it just be Montreal and Toronto that get the upside of having a Just For Laughs Comedy Festival every year. From Nov. 5th-16th three separate comedy tours across Atlantic, Central, and Western Canada will be running all under JFL’s banner.

The hysterical Jon Dore went to Winnipeg for two reasons. 1) The Winnipeg Comedy Festival this past April 2) to make a mockumentary of exploring Winnipeg, Canada.

The result is Jon’s “A Dore to Winnipeg” that will premiere on CBC this Fri. at 9PM EST. While many of us here in LA don’t have CBC, you can get a glimpse of what will hopefully come stateside with this clip of Dore visiting the childhood home of Neil Young.

Perhaps, there could be a DVD box set of this and the other experimental documentary set in Winnipeg, Guy Maddin’s My Winnipeg.

With the one and only James Adomian playing Chris Matthews, a franchised version of MSNBC’s Hardball in Canada would most certainly have an Ann Coulter played by Drew Droege, a Tegan and Sara played by Rhea Buthcer and Cameron Esposito, a Rob Ford played by Steve Agee, and a William Shatner played by Joe Roche.

See what could be very well be the future of Hardball on Funny or Die here.

From July 17th to New Year’s Eve, Mike Birbiglia will be touring throughout this great land for his Thank God For Jokes Tour. Chicago, Seattle, Los Angeles, Kalamazoo, Miami, Denver, Montreal, Jacksonville, Toronto, Cleveland, St. Louis, and so many more (and more to come) will get to see Birbiglia over the next several months.

Many tickets are now on sale, FYI.