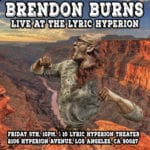 Brendon Burns has fiercely carved his place in comedy around the globe. Blazing through the international comedy festival circuit, doing his own podcasts, and having made 9 comedy specials, the unfiltered Burns is sincerely (and has been for quite some time) a comedic force to be reckoned with.

This Friday night, he’ll be headlining the amazing Lyric Hyperion and you really ought to catch it. You can (and should) go get your tickets here.