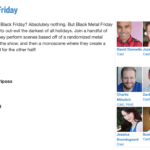 Again, some of the coolest things at UCB these days often happen past your bedtime and this Black Metal themed improv show is just one of those things.

Taking a pun on the massive American shopping day known as “Black Friday”, some of UCB’s best improvisers will be let the darkness of black metal fuel what should be hysterical chaos wrought there on the UCB Franklin stage.

Also, we’re confident this will be much more fun than standing in line for deals on electronics at big box stores.

Black Metal Friday is set for this Friday Nov. 29th at 11:59PM at UCB Franklin and tickets are only $7. Go get ‘em here and get ready to delve into the black metal void (in a long form improv sense) this weekend.

If you need to watch more Bill Burr after watching his brand new Netflix special “I’m Sorry You Feel That Way” or are gearing up to watching it soon, here’s the perfect cool down/primer in Burr’s panel interview on Conan.

1) Forget Black Friday-Jimmy Pardo’s “Pardcast-a-Thon” kicks off 6PM TONIGHT for 12 hours straight having all proceeds go to Smile Train benefiting extremely underprivileged children who need cleft palate surgery regain their smile as well as the ability to speak properly, eat, and lead a normal life (not that comedians really know what that’s like).  There will be tons of big guests as well as Jimmy Pardo himself, so tune in for some laughs/charity here.

2) Seriously, forget Black Friday and all those relatives that you’re trying to buy cheap gifts to keep up appearances.  Instead go on a COMEDY CRAWL that’s not even that long with Lettuce Entertain You (w/Stand Up) @ UCB Theatre 8PM $10, Hot Toddy @ iO West 9:30PM (Del Close)/11:30PM (Main Stage) $5.

5) Brendon Walsh was on Conan last night.  I missed it because I have lost all concept of time and don’t have a DVR.  Fortunately TeamCoco.com are good people and have his set right here.

6) The Comedy Bureau “Tips Its Hat” today to JERRY BRANDT-@HateJerryBrandt- Awkward Thanksgiving phone conversation with my Dad is done…we can now go back to ignoring each other until Christmas.  Over the last year, Jerry Brandt has made his indelible/bitter/funny mark on the “Long Beach Comedy Scene” as well as the rest of LA with his monthly show, “The Happy Tiki Comedy Show @ The Puka Bar” and his weekly podcast “Drinking Buddies” with awesome co-host Chris Adams recorded at CSULB.  Though his twitter handle is @HateJerryBrandt, he certainly only wants to hate himself in the most self-deprecating, hilarious way possible.  Upcoming Shows include: Big Trouble in Little Tokyo @ Señor Fish 11/30 8PM FREE and Ultimate Laff Down @ Khoury’s 11/2 8:30PM/$7/$10 food-drink min.  Be sure to check out his Website and Twitter.

7) From the “You Should Have Been There” Lagoon: Lenny Bruce-All Alone.

8) The Comedy Bureau is a single man (in every sense of the term) and LIVE TWEETS as an entire agency HERE.

9) You’re saving SOOOOO much money today so you can donate to the Comedy Bureau, right?  Please prove this statement true here.

10) Literally, driving home last night, the freeway was already clogged with traffic for Black Friday. I will, for the first time, feel like I’m having a better time than “real people” at an open mic.