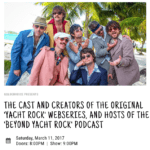 Kings of being laid back through their groundbreaking web series and podcast, Yacht Rock are coming back to us live at The Roxy next month.

Tickets are $18 and you can (and should) get them here.

If you’ve been waiting for comedy folks to delve into true stories of murder or a further exploration of music sub genres that pretty much no one has ever heard before because of they’ve probably just been “discovered”, Feral Audio has two new podcasts for you.

With all the fascination with The Jinx, Making a Murderer, and Serial, you might be interested into diving into more true murder stories from the perspectives of the great Karen Kilgariff and Georgia Hardstark with My Favorite Murder.

Feral Audio has also got the trio behind Yacht Rock to “talk about music other than Yacht Rock” with Beyond Yacht Rock. We can only imagine how far down the arbitrary music genre rabbit hole they’ll go.