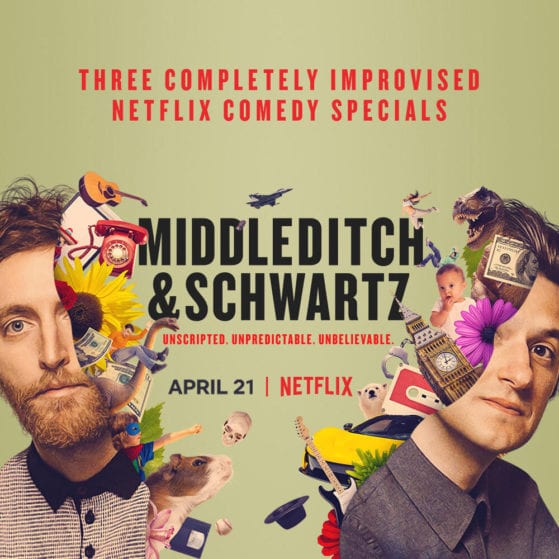 Thomas Middleditch and Ben Schwartz, referred to as Middleditch & Schwartz when performing together, have pushed themselves into rarefied air as comedic improvisers. Most people who perform improv, even at a high level, do not get to tour or make money directly from doing improv live. On top of that, a good percentage of the general public only know of the short form improv juggernaut Whose Line Is It Anyway? Though popular, short form improv can be incredibly limiting and restrictive compared to the open field that long form improv can be (improvising scenes merely from an audience suggestion or story/experience).

Yet, the improv prowess of Middleditch and Schwartz has gotten them to the point into making three whole comedy specials for Netflix (now streaming) that really do capture how purely funny Thomas and Ben can be at any given moment, from any angle, and in front or behind the fourth wall.

Playing Carnegie Hall and touring all over the place for Middleditch & Schwartz has really given them an almost unlimited canvas to really bend and break the rules of improv however they see fit.

Generally, a set of long form improv goes about 10-30 minutes. Even if a group is set to do an hour show, they usually take break in the middle and reset. Thomas and Ben push themselves by doing just under an hour’s worth of improvising. The result is that you get to see a bit of the methods behind the madness when they’ll step in and out of the artifice of their performance. They’ll make fun of the entire cast of characters they created, their fluid relationships between said characters, and push each other into more and more absurd situations/choices and then only wiggle their way out, often in a hysterically daft manner. Throughout all these performances, the duo puts on a clinic of how to use and break form in improv for the biggest rows of laughter.

Whether you’re a self-identified improv nerd or someone who has been rather on the hesitant side of watching improv, Middleditch & Schwartz is absolutely something you should get into (again, all three specials are streaming now on Netflix).

When it comes to televised improv, all that most people have seen or known about is the short form improv institution that is Whose Line Is It Anyway?

Yet, Middleditch & Schwartz might just get to that status very soon. The duo made up of Thomas Middleditch and Ben Schwartz have toured together around the globe as, perhaps, one of the most successful long form improvisational comedy acts of all time, creating hysterical scenes and having a solid, surprising narrative arcs seemingly out of nowhere.

So, Middleditch & Schwartz are about to make television history with a full-fledged long form improv (scenes get improvised just off a suggestion versus short form improv that relies on very specific games that have very specific rules to improvise through) comedy special. That comes after reaching milestones like having continuously sold-out performances at Largo, touring everywhere, and playing Carnegie Hall.

Seeing how they’ll make that translate into a comedy special given the ephemeral nature of improv will undoubtedly be fascinating (and probably why they’re releasing three performances of them). You can get your first look at what that might look like with this trailer here, then look for them to drop on Tues., Apr. 21st on Netflix.

Last year, Ben Schwartz and Thomas Middleditch took what very well may be one of the the most successful improv groups of all time, Middleditch + Schwartz, and taped multiple performances for the purposes of a comedy special. Long form improv on TV is a rare thing to see, but leave it to Ben and Thomas to figure out how to really make it work.

During his appearance on Late Night with Seth Meyers last night, Schwartz announced that there will be three different specials capturing three different performances by Middleditch + Schwartz coming to Netflix soon.

These specials could be very well break new ground for long form improv, largely a discipline in comedy that only gets seen live and we personally, really can’t wait to see what the two have cooked up together in the moment.

Though long form improv has been an established discipline in the art form of comedy for decades now, the prospect of seeing it in the form of a comedy special has been incredibly rare. The last time we even remember seeing something like that was when Schwartz led off a night of improv with the cast members of House of Lies.

Now, Thomas Middleditch and Ben Schwartz together as Middleditch + Schwartz, arguably one of the most successful long form improv teams in comedy history, will be blazing a new trail by making a special out of four tapings recorded at the NYU Skirball. The tapings are almost entirely sold out at this point, but the promise of what this might be is incredibly enticing.

Admittedly, putting long form improv as a special proves for an especially hard challenge as the nuance and ephemeral nature of improv comedy begs that you don’t cut anything from the entire performance. We’re not sure exactly what Ben and Thomas’ strategy for the final product will be, but it’ll undoubtedly set a new precedent in comedy. 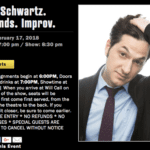 This is just a friendly reminder that Ben Schwartz’s latest show still has tickets available. That won’t be the case for long.

Go get them while you still can here. 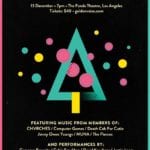 UCB Is Holding a Comedy Yard Sale Benefitting the ACLU, Full of Memorabilia From Your Favorite UCB Alums

If you’re in LA and you’re into collecting comedy memorabilia from Parks and Recreation, SNL, Key & Peele, etc., you better come before noon to get a decent parking spot and first dibs for UCB’s Comedy Yard Sale to benefit the ACLU.

If you’re not in LA, there is already plenty of stuff up for auction on eBay. 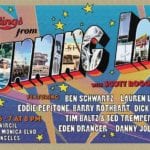 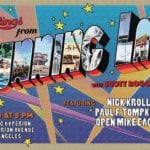 NYC’s own wonderful indie late night show Running Late with Scott Rogowsky is back in LA this week and next. As you can see above, he’s got plenty of great guests including Paul F. Tompkins, Ben Schwartz, Eddie Pepitone, Lauren Lapkus, and more.

So far, Rogowsky has got three dates at The Virgil and you can tickets are now on sale for Friday, May 5th, Saturday, May 6th, and Sunday, May 7th. If you get the tickets in advance, it’ll cost $7. At the door, it’ll be $10. He also has a date locked down at the Lyric Hyperion Theatre & Cafe on May 10th that you’ll want to keep a close eye on for tickets.

Watching Ben Schwartz go through denial, anger, bargaining, depression, and acceptance in the setting of a blissfully aloof morning show with the uber-cheerful Lauren Lapkus is a performance worthy of some awards attention.

Branded content (Cap’n Crunch is prominently featured) doesn’t get much more out there and, at the same time, better than this.

TJ Miller has been noted to make morning talk shows go off the rails.

Funny or Die’s faux version of an early morning talk show might just be somehow even more chaotic.

Ben Schwartz and Lauren Lapkus co-host The Earliest Show on Funny or Die that has all the trappings of your stereotypical, cheery talk show that’s on at 6AM. However, there’s a dark undertone that Schwarz and Lapkus deal with that makes this a little more absurdly serious than your average talk show parody.

There are two episodes released right now, but there are more coming each week.

The Intervention Might Just Be the Dramedy of the Year

Clea DuVall’s debut as a writer/director is a pretty damn fine one.

If you want more comedy in your dramedies or want to see something that exhibits the real nitty gritty of several different relationships, but does actually celebrate the idea of love without seeming too heavy handed, The Intervention just might be for you.

It just opened at Arclight Hollywood today, but you can watch it on iTunes now as well. 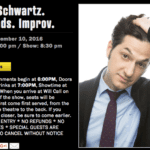 The A&E series Intervention brings to mind the struggles of those with various drug and substance abuses and the harrowing journey that all of that entails.

The Clea DuVall movie of the same name does track an Intervention, but it has nothing to really do with the ‘usual suspects’ that force an intervention.

Look for Intervention, the dramedy feature film, in theaters on August 26th.

IFC Gives a Full Episode Sneak Peek to the New Season of Comedy Bang! Bang! with Weird Al Yankovic as the Band Leader

Season 5 of Comedy Bang! Bang! on IFC is pretty close. In fact, the season premiere is this Friday, June 3rd, which will be the inaugural episode for new CBB bandleader and legendary comedic musician Weird Al Yankovic.

Fortunately, the good folks at IFC were nice enough to preview a full episode before the season premiere that you can watch on YouTube right now.