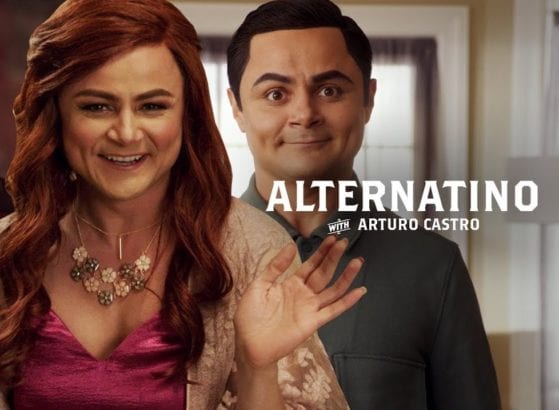 One of Comedy Central’s last sketch series, Alternatino, created by and starring Arturo Castro,  really didn’t get the due it deserved. The sort of pointed, satirical humor that Comedy Central had gotten with Key & Peele was present in Alternatino, but, unfortunately, it didn’t quite catch on the same way as its predecessor.

Thankfully, Quibi has given Arturo Castro a whole second season on their mobile streaming platform. They’re a month into having launched and we’re thankful that they’re still seeking for shows that vary from a lot of typical TV comedy offerings.

Details on when and how production will exactly get underway have yet to be announced. We’re curious as to what that might be as well what potential Alternatino pandemic themed sketches might be.

Up until this weekend, you’ve mostly come to know Quibi via a bunch of intriguing announcements of acquisitions, series orders, and additions to their development slate.

Yet, this past weekend, we got our first legitimate look at a scripted comedy series, Flipped, that honestly looks pretty fun. Kaitlin Olson and Will Forte is a pretty great pairing and a series that forces them to renovate the houses of drug cartels and other baddies has our curiosity peaked. Certainly, the trailer gives us some sort of sense if the Bluths of Arrested Development tried some scheme involving HGTV and we’re on board for that.

Even though there is a lot more to see before we can truly make a call on Quibi, they do continue to impress us.

See for yourself in the trailer for Flipped here, then keep a look out for it on Quibi on Apr. 2020.

This is yet another very intriguing entry into the upcoming short form streaming service, Quibi.
Having “self-proclaimed” home renovations experts played by Will Forte and Kaitlin Olson who are forced to renovate a drug cartel’s homes is the sort of HGTV show we want to see.
Also, Forte and Olson’s names are Jann and Cricket Melfi, which are perfect names for them and the weirdos that they have to play, and the cartel members will be Andy Garcia, Eva Longoria, and Arturo Castro, making for one hell of a cast for a “short form” series.
Truly, Jeffrey Katzenberg’s Quibi is making a compelling case for adding another subscription service to your bundle.

The Arturo Castro fronted Alternatino will be Comedy Central’s latest foray into sketch comedy and hopefully pick up the torch from where Inside Amy Schumer left off.

You can see a bit of whether that rings true for you with this full ep. that Comedy Central so nicely put on their YouTube channel. As far as we can see, there’s a lot of promise here with a sharp sense of humor that weaves in and around the modern idea of latinx identity and an explicit narrative arc, a rarity in sketch series.

You’ve one version of Arturo Castro on Broad City for years.

Now, with his own Comedy Central sketch show, you’ll get to enjoy the multitudes that he contains in the form of many, many different, wonderfully weird characters (and cleverly subverting all latinx stereotypes).

Get a taste of it here, then look for Alternatino to premiere on Comedy Central on Jun. 18th.

From the looks of it, the adventures of Abbi and Ilana will be bigger than ever in this new season, but the chemistry of their friendship, arguably the unshakeable core foundation of the entire series, remains intact. For Broad City, we have no doubt that fans will watch dozens more episodes that would undoubtedly continue to be delightful.

See for yourself in the season 4 trailer of Broad City here, then look for the season premiere on Wednesday, August 23rd on Comedy Central.

¿Dónde Está La Biblioteca? May Have Finally Been Answered by Arturo Castro

Arturo Castro, AKA Broad City’s Jaime, attempts to solve one of the most enduring, puzzling questions in existence, provided that you studied Spanish at some point in school.

Watch and see if you get the answer aqui.

Comedy Central Renews/Extends Eight Series Including Not Safe with Nikki Glaser, This Is Not Happening with Ari Shaffir, Drunk History,  Tosh.0

It seems to be the first time in a long time that many networks are staying the course with the majority of their programming.

Announced via press release, Comedy Central’s renewals and extensions are officially as follows:

It’s unfortunate to see Review go, but Not Safe with Nikki Glaser is get due reward for being pretty awesome from the get go.

It has its own even greater sense of heightened reality following Arturo throughout his life.

Watch these episodes dealing with respecting matriarchs and living life like a telenovela.