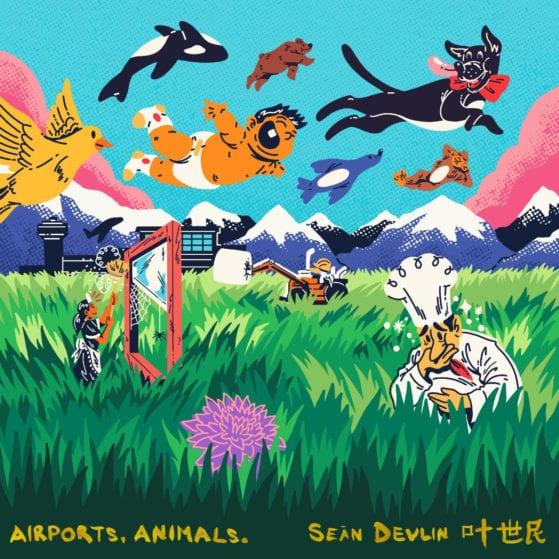 Often when you think of comedy stepping into political or socio-economic territory, one might conjure up the sights and sounds of angry man in a blazer stomping around, screaming so loud that you can see veins at their temple like seams bursting through fabric.

That said, not all politically minded, socially focused comedians descend from a fire and brimstone approach. One such comedian, Seán Devlin, has been maintaining such a peaceful presence on stage coupled with incredibly clever observations that one wouldn’t think about how politically radical he is. Also, he probably isn’t wearing a blazer and definitely not screaming into the mic.

Throughout his new album AIRPORTS, ANIMALS, Sean dismantles capitalism, jingoism, racism, and so many more -isms with truly such a calming delivery. The contrast is so subtly mischievous, yet so effective and it’s almost a wonder why he has been a fixture in Vancouver and not had his name made the rounds more often here in the States.

Either way, even if you’re not a radical lefty, AIRPORTS, ANIMALS is a damn good debut comedy album and we sincerely hope that you give it a listen and perhaps be one of the people that would spread the good word about Seán Devlin. AIRPORTS, ANIMALS will be available for purchase on Bandcamp from Canada’s own Arts & Crafts starting Fri., July 9th and then on iTunes and other streaming services on Fri., Aug. 13th.

Until then, you can get a taste of Devlin’s new album in this bit with animation by by Jappy Agoncillo here.