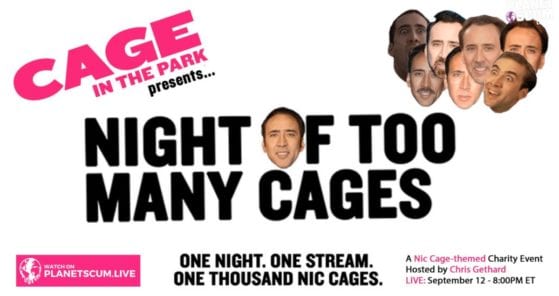 Pick of the Day: Cage in the Park presents Night of Too Many Cages 9/12

September 7, 2020
News
artists striving to end poverty, cage in the park, chris gethard, night of too many cages, planet scum

This coming Saturday, there reportedly will be an event called “Night of Too Many Cages” that will both have something to do with tapping into the energy of world renowned movie star Nicholas Cage and raise money for Artists Striving to End Poverty. Also, we do know that Chris Gethard and his online comedy network Planet Scum Live will be hosting and streaming said event and it’s presented by, of course, Cage in the Park.

Other than that, we have no idea what’s going to happen (kind of like the one and only Nic Cage himself). It’s probably better that a Nic Cage themed event is shrouded in secrecy (there’s a little bit that you can glean from this teaser about a thousand Nic Cages though).

Whatever a Night of Too Many Cages ends up being, it ought to be some sensational chaos that you should be in (virtual) attendance for (as well as raising money for a good cause).

Night of Too Many Cages is set for Sat. Sept. 12th at 5PM PT/8PM ET and streams at Planet Scum. Donations will be accepted for ASTEP during the show (but you can donate now if you’d like).