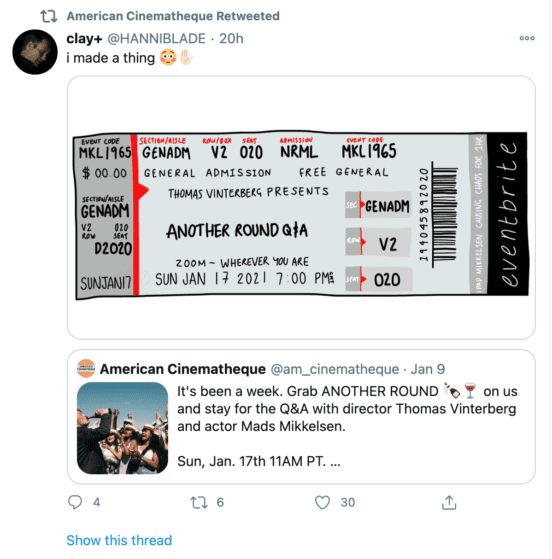 Pick of the Day: American Cinematheque: Another Round Discussion 1/14 & Free Virtual Screener

It would seem that comedy only gets a movie or two that’ll be in serious contention for awards season and, for this coming round of awards, it would seem that Mads Mikkelsen-led Danish dramedy Another Round from Thomas Vinterberg. There’s plenty of acclaim that the it has gotten, which is especially impressive during 2020’s vast wasteland of new movie releases.

The film follows the slippery-slope experiment of seeing if increasing amounts of alcohol-intake would invigorate their daily lives. See what lovely chaos that brings in this trailer.

American Cinematheque is hosting both an exclusive panel discussion with director Thomas Vinterberg and Mikkelsen on this Sun. Jan. 17th at 11AM PT/2PM ET. That’s free to attend as well as screener access, thanks to American Cinematheque, to the film itself (you’ll have to request it by Wed. Jan. 13th, FYI).