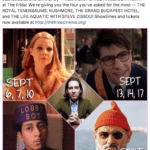 Anaheim Is Getting a Podcast Festival with ‘Now Hear This’

The popularity of podcasts are only on the rise as podcast festivals have been only getting bigger and bigger over the last few years.

So far, they’ve got Marc Maron, Scott Aukerman, Lauren Lapkus, and Paul Scheer scheduled, which is a pretty good start as far as we’re concerned.

1) Baron Vaughn on Conan. Also pick up his album “Raised by Cable”.

4) The ACME Comedy Theatre has announced that will have an open mic starting on Sept. 27th. More details to come.

5) Speaking of Conan (again), don’t miss out on the Sklar Brothers performing tonight (TBS 11PM) or to pick up their fantastic album “Hendersons & Daughters”.

6) Connected Comedy gathered late night debuts of stand-ups on the Tonight Show with Johnny Carson. We think you should take a minute or an hour and check it out.

8) Halle Kiefer and Adam Frucci discuss whether or not Whitney will survive its ad campaign on Splitsider. If NBC is going to pull shit like this (via @thatramosgirl), we think not.

13) Sorry to anyone who has to hear my rants on Tyler Perry in the next few days.