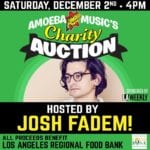 Josh Fadem doing anything is really worth your time and money. This charity auction, in which he will be an auctioneer of various items in and around Amoeba Records, also gives you the benefit of supporting a great organization while watching Fadem be Fadem.

The event itself is free to attend.

Even when she is going to Amoeba Records and talks about a bunch of books she picked up, it’s pretty damn funny. Watch her episode of Amoeba Records’ web series What’s In My Bag at the link.

Apparently, taking over a Japanese talk show set to host his own show wasn’t enough for TJ Miller’s blue demon Gorburger. He’s now expanded to having his own free zine that can and really should pick up at Amoeba Records in Hollywood.

Oh, you should be watching The Gorburger Show where TJ Miller plays a blue demon that has violently taken over a talk show and interviews recording artists, in case that wasn’t obvious in this post.

2) Fox pulled this segment of comedian Bob Oschack interviewing Asian USC students about the inclusion of Colorado and Utah in the newly formed PAC 12 Conference due to many in the Asian American community being deeply offended.  Apparently, Asian college students not knowing about the newest developments in collegiate level sports conferences is incredibly embarassing.  As an Asian American USC alumni, I could say that the clip isn’t all that offensive, but then again, I don’t really care about my ethnicity at all.  Also, lighten the fuck up. [via America’s Comedy]

3) Tonight on TV: Futurama gets their season finale in a way that they’ve never been drawn before (Comedy Central 10PM), Louie also reaches its season finale (FX 10:30PM), NTSF:SD:SUV has former Crossing Jordan star Jerry O’Connell (Adult Swim 12:15AM), and Thursdays are running out of things to watch.

4) In LA open mic news, there will be a new open mic at the Hollywood Improv and an open mic for sketches at the Westside Comedy Theater (those interested must sign-up in advance) all this Sunday.

5) Here’s a list of recently released and upcoming comedy albums that you could go to most stores to pick up, unlike us going to Amoeba.

6) LA’s only rooftop comedy show, Long Way Down, gets a nice write-up in LAist.

2) Jorge Garcia from Lost apparently tried out stand-up at the Laugh Factory. [via BTNPR]

3) Davey Johnson is really one of the funniest people we know. Watch ‘What’s What?’

10) So according to their posted calendars, the Comedy Store and Sal’s Comedy Hole will still be having their open mics run on the 4th of July.  Anyone else running their mics/confirming they hate their families, don’t have friends? (Because no one hates fireworks and the taste of BBQ unless you’re a pinko commie)

1) Why has no one done this? Twitter Feed Theater by Paul Cibis. #BadStartToAEulogy

3) There’s already a @SaveSportsShow to get Norm’s Sports Show back on Comedy Central.  I don’t know what getting Twitter followers will do as far as convincing a network to change their mind, but follow it for a good cause.

6) Tig Notaro Interview for the Hairpin.

8) Patton Oswalt in preview of Futurama!

9) Ricky Gervais has joined the Onion’s fight to get a Pulitzer.

14) Special Thanks to Asterios Kokkinos “If enjoying your website is wrong, I don’t want to be right.” Follow @asterios because it’s never wrong and really funny.

15) I did 30 min. drunk last night for 8 people and it went “not terrible” though apparently I’m a pretty loud drunk.  Is there some type of comedy badge for this?