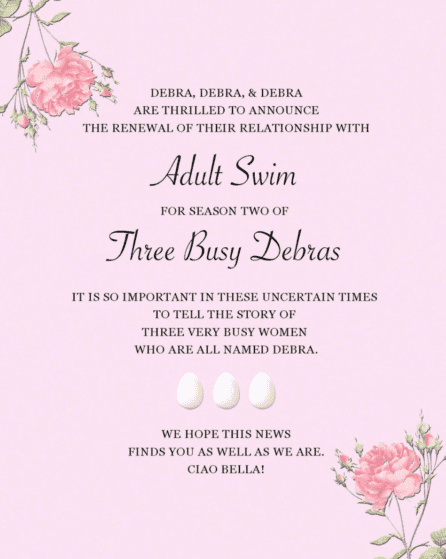 The ultra-absurdist feminist satire Three Busy Debras has done so well that it’s getting a second season over at Adult Swim. That means more of the rambunctiously dark comedy from Debra, Debra, and Debra (Sandy Honig, Mitra Jouhari, and Alyssa Stonoha) in their overly bright, overly picturesque neighborhood.

Congrats to all three of the Debras on getting to stay busy and for this absolutely gorgeous renewal announcement card (if that’s not a thing yet, it should be).

In the meantime, you can stream or re-stream their first season over at AdultSwim.com.

AHEM! Thrilled to announce our announcements got back from our stationers in Italy. They reopened the economy just for us! Ciao Bella! – Debra

Get Your First Look at Three Busy Debras, The Adult Swim Series

Three Busy Debras rose through the verve of their own absurdist feminist humor in shorts that they (Alyssa Stonoha, Sandy Honig, and Mitra Jouhari) have made over the years.

Now, they stand at the precipice of a full-fledged live action Adult Swim series and we can’t wait to see what hilarious abstract hijinks they’ve crafted for all of us.

The Three Busy Debras trailer definitely gives a great taste of what’s to come and leaves us wanting more.

Sandy Honig, Alyssa Stonoha, and Mitra Jouhari AKA Three Busy Debras are going to get their own, live action, quarter hour show at Adult Swim.

Those in the know have enjoyed their high absurdity both in shorts they’ve released and their special, pop-up engagement at Carnegie Hall.

Very soon, we’ll get to see their world of “Connecticut deranged housewives” unfold. Also, take note that this is Amy Poehler is going from EP’ing Broad City to EP’ing Three Busy Debras.

Personally, we can’t wait for this to give Adult Swim a bit of a fresh, new look.

Don’t even worry about the fact that they’re not asking how many white feminists, but exploring how three of them will screw in a light bulb and giving the old joke premise of “how many _____ does it take to screw in a light bulb?” a postmodern, intersectional-ist shake-up.

Then, if you’re ready, think about all that stuff we said up top.

Only a handful of the biggest comedians have ever played the legendary Carnegie Hall including Bob Hope, Louis C.K., Kathy Griffin, Jerry Seinfeld, Phyllis Diller, and Steve Martin. For many, it was a lifelong goal to play there and signified a rarefied status in comedy.

Little did all of these people know that they could just rent it out for a bunch of money.

Comedy trio Three Busy Debras (you might remember them from their otherworldly Brunch video) uncovered this secret and plans on trying to put on their own free comedy show at a recital space in the very same Carnegie Hall through a Kickstarter campaign.

So, Sandy Honig, Mitra Jouhari, and Alyssa Stonoha are looking to raise $7500 and already have $4929 of that raised. If you donate, you could get anything from personalized poetry to requested cover songs to a .zip file of papers they wrote in college.

They have until May 19th to raise the money that will cover the base level cost of putting on a show there.

Get in on their mischief and donate here.

Like we said above, you might not be ready for this futuristic, otherworldly brunch from the Three Busy Debras.

Still, even if you’re at beginner level brunch, you should watch it anyway.

After all, it’s 4/20 and you wanna see something trippy, no?