No Glory, which will be based on the yet-to-be-published manuscript from former National Security Operative Scott Shepard, has Kumail and McKay attached to an adapted script by Sam Bain.

As few other details are available at this time, we’d like to make an educated guess (based on the mix of Kumail, spy action comedy, and McKay’s current auteur period of scathing satire) that No Glory might end up being a much more high octane version of Amazon’s Patriot.

Even if it’s not, McKay and Nanjiani together does sure seem like a winning combo and we can’t wait to see whatever this is.

CBS Gets a Bit Edgy with “No Activity” from Will Ferrell, Adam McKay, Funny or Die

This uncensored trailer for No Activity, which will be a marquee series of CBS streaming platform, CBS All Access, is decidedly (and thankfully) against type for the broadcast network.

Will Ferrell, Adam McKay and Funny or Die along with the cavalcade of your favorite comedy stars (Tim Meadows, Jason Mantzoukas, Arturo Castro,  Bridget Everett, Amy Sedaris, etc.) explore what happens in the downtime of detectives and criminals (i.e. the countless hours spent waiting for something to happen).

Of course, such downtime leaves room for plenty of decidedly non-professional police or criminal syndicate behavior. See for yourself in the trailer here.

No Activity debuts on CBS All Access on November 12th.

What seems fun about this series, based on the Aussie series of the same name, is that it takes the dynamic of a “buddy cop comedy” to the next level.

No Activity specifically “…follows two low-level cops who have spent too much time in a car together; two criminals who are kept in the dark; two dispatch workers who haven’t clicked; and two Mexican tunnelers who are in too small a space considering they’ve only just met.” It’s a buddy comedy on all sides of the law.

Ferrell and McKay’s Gary Sanchez and Funny or Die will be producing it with CBS to be seen on CBS’ digital platform, CBS All Access.

Since it’s a digital series and has a Ferrell and McKay stamp on it and the original Aussie star Patrick Brammall is starring in this American version, we are crossing our fingers that this will get to seem less like the multicam sitcom fare that represents most of CBS’ comedy brand and that another original cast member, the amazing Sam Simmons will be brought on as well.

10 years ago, The Landlord came out on Funny or Die and led Will Ferrell and Adam McKay on a path towards changing the game in terms of comedy content on the Web.

To mark the milestone, Will and Adam are doing their own “accurate” recounting of FoD’s history in a new weekly series. Start with part one here. 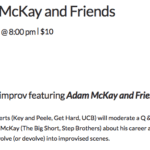 This night will go way back to the days that Adam McKay used to perform live and do improv. Ian Roberts being one of the UCB 4 is also another reason you shouldn’t miss this.

Apparently, Will Ferrell and Adam McKay “didn’t” just make him up from a random name on Will’s phone.

You can think of Gary Sanchez Productions as the sibling company to Will Ferrell and Adam McKay’s Funny or Die that takes on more the feature film side of things in contrast to FoD’s digital and TV angle.

The namesake of the company has been shrouded in secrecy for years as the production company’s landing page says:

Gary Sanchez Productions is a film production company spearheaded by Paraguayan entrepreneur and financier Gary Sanchez. Also Americans Will Ferrell, Adam McKay, and Chris Henchy. Please see films so Mr. Sanchez can continue to live like king in poor, unequal country.Add Gary as a friend on Facebook!Please note: All inquiries regarding Rottweiler puppies should be directed to Mr. Sanchez’s home phone number. If you do not already have Mr. Sanchez’s home phone number, you will not be considered for the next litter. Mr. Sanchez is no longer accepting new clients.

There has even been an explanation from McKay about Sanchez just being a name and nothing more on WTF with Marc Maron.

For the first time ever, and “incidentally” on the 10th anniversary of Gary Sanchez Productions, Variety got a brief, but exclusive interview with the reclusive financier.

Such gems from the conversation include:

Variety: What has been your proudest accomplishment in your time here?
Gary Sanchez: One time I fought a man from the hills of Paraguay named Bako who was large and fearless. He had killed jaguars with a stick many times. I broke his neck while his whole village watched and cried.Oh wait, you mean my proudest accomplishment in regards to the company? That would be “Daddy’s Home,” “Eastbound and Down,” “Drunk History” and “Step Brothers.” I also think “Welcome to Me” is a gem.

Now an acclaimed director, Adam McKay used to be part of the early days of the Upright Citizens Brigade and, as such, used to pull some pretty ballsy pranks, especially for a time when the UCB 4 was just getting started.

Watch McKay go into detail with Stephen Colbert on The Late Show.

Funny or Die, Adam McKay, and Archie Comics Team Up For an Adaptation of “Archie” for Broadway

Funny or Die is really expanding their brand with their weatherman competition and now this Archie stage production.

Adam McKay is set to write it, while Funny or Die and Archie Comics will collaborate on the actual production at a date TBD.

McKay commented on the project, “Archie represents a bygone era of America and like all bygone eras, there are elements we miss and elements that should be bygone. This will be a musical that deals with both those realities in a bright, colorful and slightly demented way.”

So, with that in mind, you can look forward to both this Archie and A Confederacy of Dunces done live on stages in the not so distant future.

The likes of Ben Schwartz, Adam McKay, and Seth Rogen are teaming up on an upcoming untitled feature that was pitched by Schwartz. McKay is attached to direct and produce while Rogen is attached to star and also produce.

There’s no synopsis, premise, or logline, but, already, we have the feeling that this project might, at the end of it, have a giant blooper reel or even an alternate uncut version.

A short lived 80’s TV series known as Manimal following a man who could morph into different animals and fight crime has been in development to be adapted into a movie by Sony Pictures Animation for some time now. Will Ferrell and Adam McKay’s Gary Sanchez, and Jimmy Miller’s Mosaic have now hopped onto the project and it will hopefully have more traction in the next year or so.

In fact, Jay Martel and Ian Roberts, whose work you’re probably well acquainted with on Key & Peele, are set to write the script and this has so many elements to be every bit the fun meta comedy romp that 21 and 22 Jump Street has been.

We just reported the possibility of Ant-Man being directed by David Wain. Another director in contention was Peyton Reed, who was just announced as the replacement for Edgar Wright. Reed whose name might not be as recognizable as Wain’s has a wide and varied directorial filmography including Yes Man, Upright Citizens Brigade the TV series, Bring It On, Mr. Show, The Weird Al Show, and more.

In sort of a twist, Adam McKay, who was a possible choice for Marvel as a director, will now help write the script.

Citing creative differences, Edgar Wright has left his post as director of the upcoming Ant-Man movie from Marvel Studios. Of course, a search for his replacement has been immediately underway with the aforementioned names of Adam McKay, Ruben Fleischer, and Rawson Thurber being floated around.

Many of you probably know McKay’s filmography/Funny or Die over Fleischer’s or Thurber’s, but know that Fleischer and Thurber helmed Zombieland and Dodgeball, respectively. Wright leaving the project is sad, but we’ll be intrigued what any one of the three will do.

The Artist’s Michel Hazanavicius to Direct ‘Will’ Starring Zach Galifianakis

The Artist’s Michel Hazanavicius to Direct ‘Will’ Starring Zach Galifianakis

Do you remember The Artist taking Best Picture at The Oscars a few years ago, seemingly out of nowhere? Well, director Michel Hazanavicius is now moving into comedy by being set to direct Will from Will Ferrell and Adam McKay.

In addition to that being an incredibly intriguing pairing, Galifianakis is now attached to star and Demetri Martin is writing Will. We can’t wait to see what comes of this.

NBC is making a bold, but great move, by looking for two new original comedy series via submissions at their brand new Comedy Playground.

There will be taking pitches that will be reviewed by a board made up of Aziz Ansari, Jason Bateman, Robert Carlock, Sean Hayes, Mindy Kaling, Jason Katims, Josh Lieb, Eva Longoria, Adam McKay, Seth Meyers, Todd Milliner, Will Packer, Amy Poehler, Craig Robinson, Maya Rudolph, Mike Schur, Adam Scott and Mike Shoemaker, then narrowed to ten projects for pilot presentations, then will greenlight two series to follow each other in an one-hour block.

We can only hope that they’ll find their next hit comedy series to follow Parks and Recreation and Community for next year.

NBC latest addition to their development slate this pilot season is Mission Control from Will Ferrell & Adam McKay’s Gary Sanchez Productions that’s something like an Anchorman set at NASA and Love is Relative from Borat’s Dan Mazer.

There’s lots of interesting stuff that we’d like to some series from.

Shez Cassim got put in jail in the United Arab Emirates for 8 months and counting because of this video clearly intended to be just a funny video.

As you’d imagine, there’s so much goofing around on the set of the Anchorman sequel, that there would be a whole movie worth of off script genius.

Turns out that was exactly the case and Adam McKay would like to release that whole other version to theaters.

Jason Sudeikis Added to Gary Sanchez Productions Version of a Romantic Comedy, “Sleeping With Other People”

Jason Sudeikis Added to Gary Sanchez Productions Version of a Romantic Comedy, “Sleeping With Other People”

Will Ferrell and Adam McKay’s production company Gary Sanchez is filling out their cast with Jason Sudeikis and the already cast Kirsten Dunst for one of their latest feature projects “Sleeping With Other People”, which based off the premise, would be the way that Ferrell and McKay would make a romantic comedy.

Keep an eye out for this one as it might just turn out to be a nice indie rom com.

Adam McKay Like Matt Braunger in the L.A. Times

Adam McKay Like Matt Braunger in the L.A. Times

This is so amazing. I’m such a huge fan of Adam’s from Anchorman, Talladega Nights, Step Brothers, etc, all the way back to his work on SNL.

This made my month. Thanks, Adam!

Good for Matt Braunger! That’s more than Favstar could do, right?