The duo of Brian McElhaney and Nick Kocher, often known better as BriTANick have produced some of the best, most ridiculous sketches/short films (see 2011′s Eagles Are Turning People Into Horses) over the years. Their success has led them to being quite busy writing at SNL, performing all over the place, etc.

Thus, morsels from BriTANick only come around every now and again, but they are sure delectably funny whenever they come around. So, with all of that in mind, please enjoy BriTANick’s latest Dating App Writers Room here.

While there is truth that “beauty is in the eye of beholder”, perhaps that there is too much truth in that for Adam Lustick of Havard Sailing Team.

See for yourself in their new sketch here.

Adam Lustick wrote a comedy pilot “The Mark Lembeck Technique” that dives into the mind of a therapist who suffered a mental breakdown and is convinced that he can still offer people help as a therapist despite his reality being fractured.

Jason Alexander stars as Mark Lembeck and really hits the mark with being the bizarre, but sweet old man.

You can watch the whole thing at AdultSwim.com now.

Mr. Neighbor’s House premieres at midnight followed by the pilot Hindenburg Explodes from Rob Corddry at 12:30AM. Then, Adam Lustick’s pilot The Mark Lembeck Technique starring Jason Alexander closes out the hour at 12:45AM.

Mr. Neighbor’s House looks to be twisted parody of Mister Rogers Neighborhood, The Mark Lembeck Technique, as seen in this promo, follows a really off-kilter therapist played by a frail voiced Jason Alexander. Corddry reimagines the events on a certain infamous dirigible leading up to the crash of the Hindenburg in Hindenburg Explodes.

All in all, it’s an evening of alternative realities, Adult Swim style, and we’re on board for that. 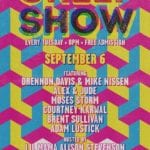 Just when they thought wedding planning couldn’t be any more trying, the couple at the center of Super Deluxe’s amazing Disengaged web series find that their thankfully separate bachelorette parties aren’t as separate as they had hoped.

Adam Ruins Everything Takes on Jaywalking

Adam Ruins Everything, for once, actually ruins something that you probably already hate: jaywalking.

Find out the real story for why you yell “bullsh*t!” anytime you get a ticket for illegally crossing the street here.

Jason Alexander as a therapist who snaps and then still treats people? We’re on board.

Adult Swim’s latest pilot comes from Adam Lustick who you’ve probably seen on Harvard Sailing Team and will indeed have Jason Alexander as a therapist who just loses it, but still takes on his patients, giving them crazy advice on how to go about their lives.

Somehow, this seems to mirror any and all who took any actual advice from George Costanza and applied it to their real life.