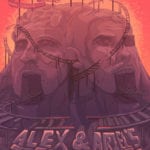 A mix of “groundbreaking avant-garde films and electrifying tour-de-force performances” will be featured with the line-up in the flyer above as curated by groundbreaking filmmakers Alex Kavutskiy and Ariel Gardner.

Esteemed film critic Elvis Mitchell has made a name for himself for years through his insights on cinema at NPR and KCRW. With that, his voice, look, and persona capture a certain spirit of dry, high brow film theory discussions.

Even if you’re not familiar with Mitchell or Channel 101, you can agree that more one-on-one interviews should be as otherworldly as they are here.