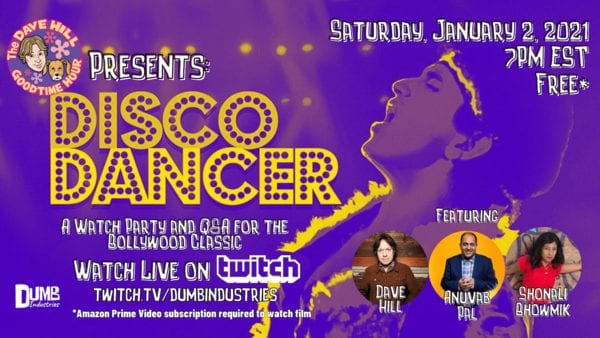 A screening of Bollywood’s 1982 smash hit DISCO DANCER, followed by a Q&A with Dave Hill, Anuvab Pal, and Shonali Bhowmik!

Depending on whom you ask, the greatest film of all-time is Citizen Kane, Vertigo, or maybe Taxi Driver or something. But all of those movies suck compared to a 1982 Bollywood film called DISCO DANCER, arguably the only movie where you will find a main character who suffers from something called “guitarphobia,” an assassin who only kills disco dancers, and about 500 other things that solidify it as the greatest movie all-time.

Join comedian and disco enthusiast Dave Hill; Mumbai-based comedian and author of the book Disco Dancer Anuvab Pal; and musician, comedian, and Bollywood authority Shonali Bhowmik for a viewing party of the greatest movie of all-time, DISCO DANCER, followed by a Q&A with Dave, Anuvab, and Shonali. Boy criminal Chris Gersbeck and New Jersey chicken rancher Dez will be on hand to moderate and take live calls. Call-in! (347) 474-0260

It should be noted that the director of DISCO DANCER threatened to kill Anuvab once, so you know this is going to be a special evening full of incendiary language not to be missed. Bring the whole family!

Tune in on Twitch at twitch.tv/dumbindustries